Remember: Holy Door Closes At The Beginning of Sunday's 10:30 AM Mass 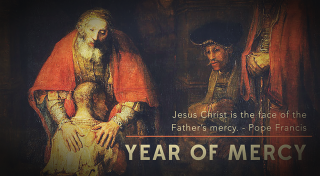 It has been a privilege to have a Holy Door designated at Holy Cross Church for the soon to be completed Year of Mercy. Our thanks to the Holy Father and Bishop O'Connell. We have hosted many pilgrimage groups and distributed over one thousand special issues of the Magnificat for the Year of Mercy along with just as many tri-fold brochures printed by us explaining the Holy Door, The Year of Mercy and the Catholic Church's teachings on indulgences.

The special privileges accorded a visit to the Holy Door along with its required acts of penance and prayer will end on November 13th. Those wishing to avail themselves of these special graces are encouraged to seek them before then.

Be sure to avail yourself of the graces associated with prayer during the Year of Mercy before the year closes on November 20th.

Confession, Communion, Prayer for the intention of the Holy Father, visit to a Holy Door and perfect contrition for sin yields a plenary indulgence for yourself or someone deceased.

Indulgences and Sin: The Holy Door Join us in the St. Joseph Meeting Room on Wednesday, March 2 for a discussion on the meaning of indulgences in the Catholic Church. We'll take a look at the history of indulgences back to the time of the Crusades and the Protestant Reformation and the Council of Trent. We'll spend a time looking at the reform of the indulgences just after Vatican II and their modern revivification beginning with John Paul II. We'll conclude with a look at the meaning of the indulgence offered by Pope Francis during the Year of Mercy.

It would help if you would like to read the section of the Catechism of the Catholic Church on indulgences before we meet, but it isn't absolutely necessary.

1471    The doctrine and practice of indulgences in the Church are closely linked to the effects of the sacrament of Penance.

What is an indulgence?

“An indulgence is a remission before God of the temporal punishment due to sins whose guilt has already been forgiven, which the faithful Christian who is duly disposed gains under certain prescribed conditions through the action of the Church which, as the minister of redemption, dispenses and applies with authority the treasury of the satisfactions of Christ and the saints.”81

“An indulgence is partial or plenary according as it removes either part or all of the temporal punishment due to sin.”82 The faithful can gain indulgences for themselves or apply them to the dead.83

The punishments of sin

1472    To understand this doctrine and practice of the Church, it is necessary to understand that sin has a double consequence. Grave sin deprives us of communion with God and therefore makes us incapable of eternal life, the privation of which is called the “eternal punishment” of sin. On the other hand every sin, even venial, entails an unhealthy attachment to creatures, which must be purified either here on earth, or after death in the state called Purgatory. This purification frees one from what is called the “temporal punishment” of sin. These two punishments must not be conceived of as a kind of vengeance inflicted by God from without, but as following from the very nature of sin. A conversion which proceeds from a fervent charity can attain the complete purification of the sinner in such a way that no punishment would remain.84 (1861, 1031)

1473    The forgiveness of sin and restoration of communion with God entail the remission of the eternal punishment of sin, but temporal punishment of sin remains. While patiently bearing sufferings and trials of all kinds and, when the day comes, serenely facing death, the Christian must strive to accept this temporal punishment of sin as a grace. He should strive by works of mercy and charity, as well as by prayer and the various practices of penance, to put off completely the “old man” and to put on the “new man.”85 (2447)

In the Communion of Saints

1474    The Christian who seeks to purify himself of his sin and to become holy with the help of God’s grace is not alone. “The life of each of God’s children is joined in Christ and through Christ in a wonderful way to the life of all the other Christian brethren in the supernatural unity of the Mystical Body of Christ, as in a single mystical person.”86 (946-959, 795)

1475    In the communion of saints, “a perennial link of charity exists between the faithful who have already reached their heavenly home, those who are expiating their sins in purgatory and those who are still pilgrims on earth. Between them there is, too, an abundant exchange of all good things.”87 In this wonderful exchange, the holiness of one profits others, well beyond the harm that the sin of one could cause others. Thus recourse to the communion of saints lets the contrite sinner be more promptly and efficaciously purified of the punishments for sin.

1476    We also call these spiritual goods of the communion of saints the Church’s treasury, which is “not the sum total of the material goods which have accumulated during the course of the centuries. On the contrary the ‘treasury of the Church’ is the infinite value, which can never be exhausted, which Christ’s merits have before God. They were offered so that the whole of mankind could be set free from sin and attain communion with the Father. In Christ, the Redeemer himself, the satisfactions and merits of his Redemption exist and find their efficacy.”88 (617)

1477    “This treasury includes as well the prayers and good works of the Blessed Virgin Mary. They are truly immense, unfathomable, and even pristine in their value before God. In the treasury, too, are the prayers and good works of all the saints, all those who have followed in the footsteps of Christ the Lord and by his grace have made their lives holy and carried out the mission the Father entrusted to them. In this way they attained their own salvation and at the same time cooperated in saving their brothers in the unity of the Mystical Body.”89 (969)

Obtaining indulgence from God through the Church

1478    An indulgence is obtained through the Church who, by virtue of the power of binding and loosing granted her by Christ Jesus, intervenes in favor of individual Christians and opens for them the treasury of the merits of Christ and the saints to obtain from the Father of mercies the remission of the temporal punishments due for their sins. Thus the Church does not want simply to come to the aid of these Christians, but also to spur them to works of devotion, penance, and charity.90 (981)

1479    Since the faithful departed now being purified are also members of the same communion of saints, one way we can help them is to obtain indulgences for them, so that the temporal punishments due for their sins may be remitted. (1032)

Close Up Of Papal Coat of Arms 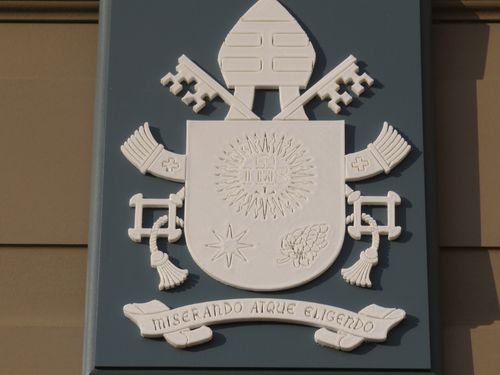 Here's a close up of the Papal Coat of Arms on the exterior of the Holy Door for the Year of Mercy. It's 3D printed in many pieces and assembled together on the wooden plaque.

Holy Door Sealing and Blessing On Sunday After 10:30 AM Mass 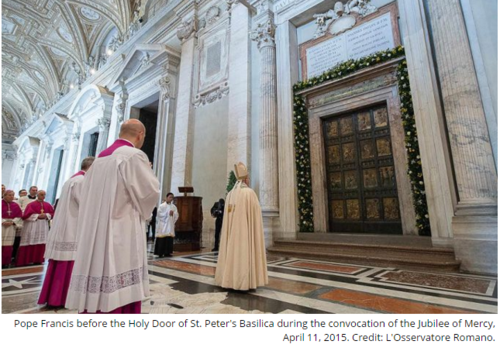 Join us for the blessing and sealing of the Holy Door for the Year of Mercy after the 10:30 AM mass on Sunday here at Holy Cross.

Not only does the door show solidarity and union with the catholic, universal church throughout the world, but it stands as a sign of God's mercy and the path to salvation through Jesus Christ and His Church.

The door will be sealed this Sunday in anticipation of its joyful official opening for the year of Mercy beginning on December 8th 2015.

We will mark the door with the Papal and Episcopal (Bishop's) Seals. Visits to churches with Holy Doors during the Year of Mercy are a pious way of expressing our gratitude for Christ's mercy and of receiving special graces. More information about these graces or indulgences will be posted near the door and in the church.