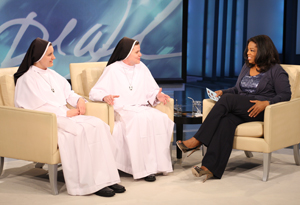 Not what you might be thinking....the Sisters of Mary, the Mother of the Eucharist!

Check out highlights of their appearance here.

Hardball, The Factor, The Congressman, The Bishop, The Eucharist

Bishop Tobin of Providence, Rhode Island has been making the rounds of television and media outlets explaining why he asked Representative Kennedy  to refrain from receiving Holy Communion. It seems many in the media have sided with Kennedy and are calling the bishop's position inconsisent with other teachings of the church, or an interference with the separation between Church and state.

Mr. O'Reilly, for example, wondered as a "confused" Catholic, why, if the Church is against abortion and capital punishment, the church does not sanction those politicians who are in favor of capital punishment. The bishop explained the intrinsically evil nature of abortion, which can never be right compared to the theoretical necessity for the state to protect itself by the use of capital punishment, which can be permitted in exceptional cases. (John Paul II's strong condemnation of capital punishment in Evangelium vitae is coupled with the reservation of its right by the state in rare, "practically non-existent" cases.) Ths is surely a difficult concept to explain during the typical sound bite, confrontational news program.


Mr.  Matthews seems intent on browbeating Bishop Tobin, first by accusing him of transgressing into politics by his public correction of Congressman Kennedy, and then by being unwilling to define what penalty (presumably legal one) a woman should incur who procures an abortion.

Visit msnbc.com for Breaking News, World News, and News about the Economy

The Meaning of Scandal

Several of the interviews and discussions conflate the everyday use of the word "scandal," with its technical use in Church law. Scandalous behavior these days would seem to be in the eye of the beholder: Adam Lambert's behavior at the American Music Awards was scandalous enough to get him disinvited from ABC, but made him a hot property for CBS. Scandalous in canon law does not mean something which generates shock or surprise.

Separation Between Church and State

Whatever the constitutional "separation between church and state" means, it clearly does not mean that politicians ought to have a wall of separation between their moral beliefs and their voting behavior or public advocacy. This theoretical comparmentalization was first announced by John Kennedy, refined by Mario Cuomo and used by politicians ever since to justify voting for intrinsically wrong acts like abortion or destructive human embryonic stem cell research. The latest generation Kennedy has moved beyond privately holding that abortion is wrong, but voting for it anyway; he avows, as a Catholic, the right to have an abortion belongs to every woman. And then implies that the prohibition against abortion is just one among many rules, with which Catholics are free to disagree, even publicly.

No one argues that laws should be passed which specifically protect the Catholic church, or that Catholic politicians should vote to outlaw the consumption of meat on Fridays during Lent. No one argues that a Catholic politician must do whatever his/her bishop or the pope instructs them to do. (This was a fear raised by modern day Know Nothings, if John F. Kennedy was elected. There is no small measure of anti-Catholicism in the conspiracy theories which picture Catholic bishops huddled in Washington writing our nation's laws.) But there can't be a disconnect between the moral beliefs of our politicians and their public actions. And if you choose to call yourself Catholic, there is a presumption that the beliefs of Catholicism infuse your thoughts and inform your moral behavior, even and especially your voting.