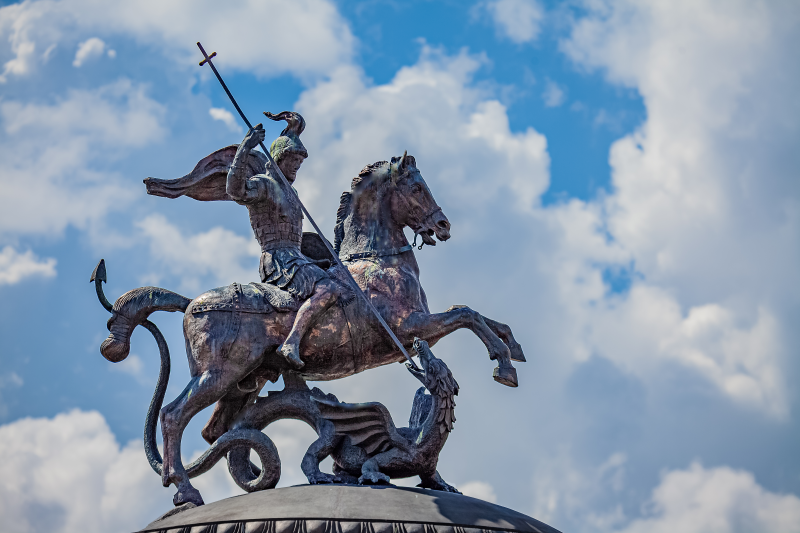 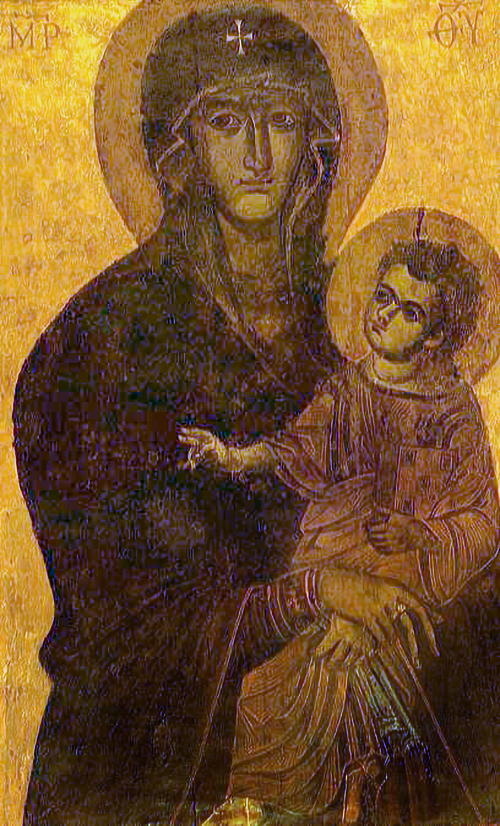 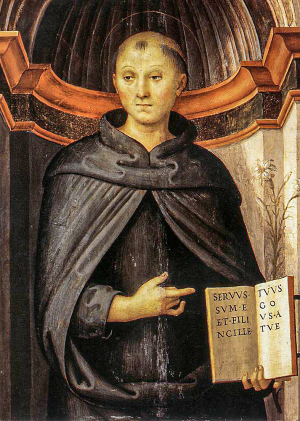 Nicholas was named for the rather more famous Saint Nicholas of Myra (Saint Nick) when his parents prayed at St. Nicholas' shrine to conceive and bear son after years of infertility.

He developed a reputation for sanctity and miraculous healing through his intercessory prayer, especially for infants and the souls in purgatory.

His feastday is a good reminder to pray for the deceased and the sick. Our prayers can have efficacy through the same power as St. Nicholas of Tolentine, our Loving Savior. 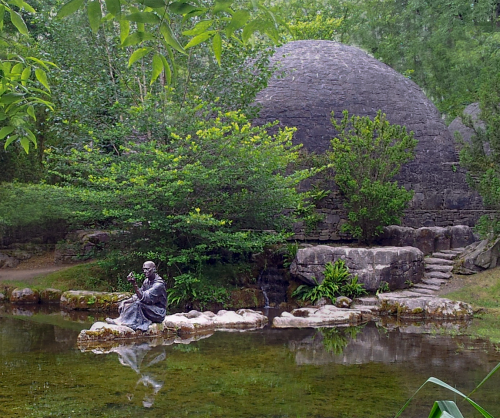 St. Fiacre is the patron saint of gardeners and it's great that our summer gardens are putting on a final burst of color before fall arrives. The parking shrubbery is covered with fragrant, white blossoms of clematis and the yellow cosmos are blooming (and seeding!), while the re-blooming roses are providing a final goodbye of color and fragrance.

The photo of St. Fiacre's garden comes from inniskeenroad.files.wordpress.com and shows Fiacre's oratory and stone hermitage in the background.

Martyrdom of St. John the Baptist 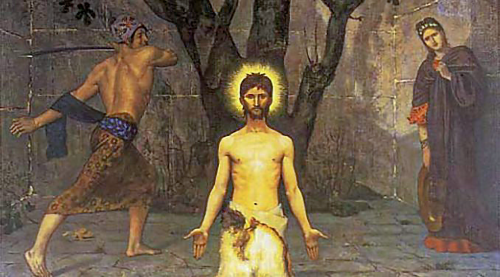 There are many, many paintings of St. John's beheading and even of his severed, bloody head. I chose one which avoids the gruesome imagery, sometimes painted as a tour de force by the artist to display his skills in depicting blood, horror or violence. I trust these images already reside in your imagination.

Instead, his sanctity and courage shine forth in this painting, even though his powerlessness in the face of vengeance, hatred and jealousy is also on full display.

The opening prayer of today's mass praises John as not only having preceded him as his herald but preceding him in death as well. St. John the Baptist, a martyr for truth and righteousness, pray for us. 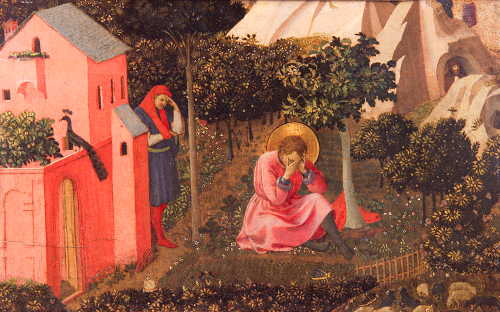 St. Augustine exercised a great influence not only on the early church, but on the development of church theology down through the centuries.

He is pictured by Fra Angelico at the moment of his remorseful conversion back to the faith of his youth.

His thinking in three was instrumental in beginning modern theological discourse about the Trinity, an interior spirituality and personal relationship with God and Jesus Christ.

Our modern spirituality can prosper if we get back to basics, especially a reverence and love for the Eucharist. 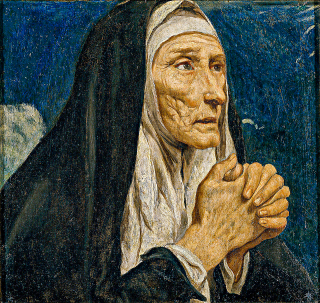 Saint Monica is a saint for our times. She herself likely struggled with drinking to excess and persistently prayed and witnessed Christ's love both to  her pagan husband, who converted on his deathbed, and her son Augustine, whose return to the faith is one of the most consequential and well-known in history.

Her persistence in prayer and intercession before God and man is a model of faithfulness and love. 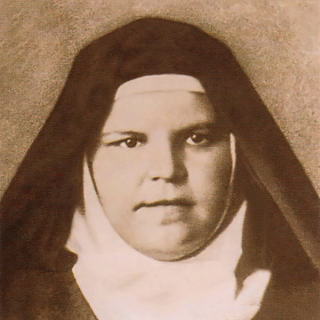 Sr. Miriam was canonized in 2015 by Pope Francis. Her whole life testifies to the reality of the supernatural realm; she enjoyed close relationships with Jesus and especially the Holy Spirit from an early age.

Not only did her personal life display signs of piety such as stigmata, prophecy, ecstasy, even levitation, but she showed an openness to the Holy Spirit unusual especially for the pre-Vatican II church. The promptings of the Holy Spirit urged her not only to become a nun, but to eventually found monasteries in Jerusalem and Bethlehem. She died from a wound she incurred while carrying water to workmen at the monastery's construction site in Jerusalem. 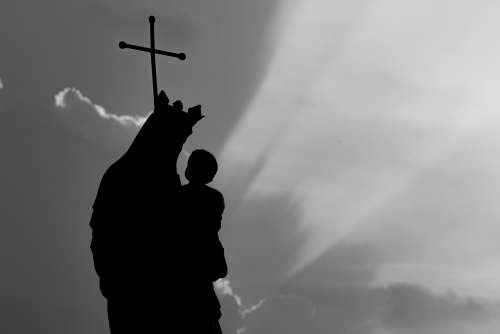 Today's feast day has been linked from Pre-Vatican II times with the Immaculate Heart of Mary, a devotion which we saw was initially popularized by St. John Eudes and then by St. Margaret Mary.

As with all Marian feasts, it points to a truth about the relationship between Mary and Jesus and the nature of the Incarnation itself. Having settled the controversy in the early church about whether Mary could properly be called the "Mother of God" or only Mother of Christ human nature, it is a logical and prayerful consequence to attribute Queenship to her since she is truly the Mother of the King of the Universe. While we may no longer think in metaphors about royalty as did previous generations of Catholics, celebrating Mary's queenship conveys an important truth about the Incarnation and the dogma of the Assumption.

I chose this image of Mary, since it explicitly includes her maternity of Christ as the source of her exaltation. 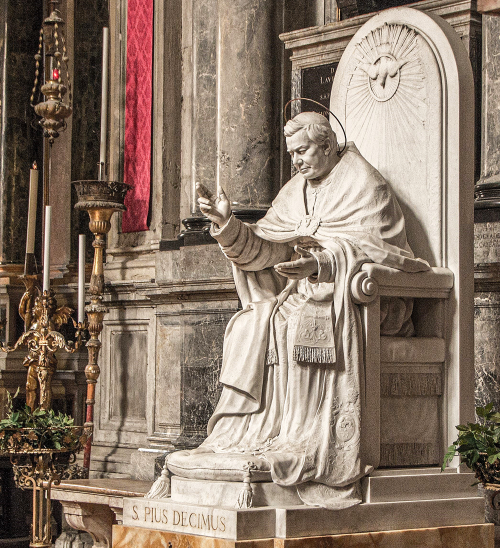 Pius X was one of the first popes to be canonized in the modern age, which is partly responsible for so many churches, schools and Catholic institutions being named in his honor.

Whenever we receive Eucharist we do so with limited understanding of so great a gift and mystery, but should always do so with the utmost reverence and love. 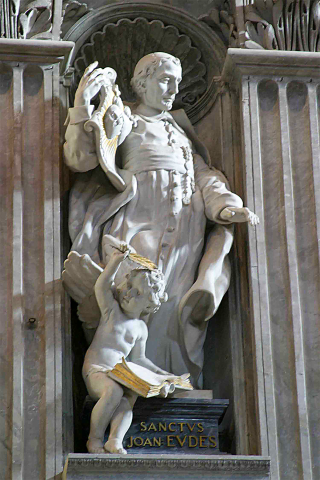 St. John Eudes was a founder of the French School of Spirituality which advocated a strong, personal relationship with Jesus Christ, an important role for Mary as the mother who permitted his entry into the world and a deep, interior prayer life. He founded an association of diocesan priests who live as vowed religious and promote vocations to the priesthood and the formation of priestly candidates. They also preach missions and teach at the college level.

St. John is perhaps best known for his promotion of devotion to the Immaculate Heart of Mary and the Sacred Heart of Jesus. We do not think it is odd to see images of Jesus' and Mary's disembodied hearts, but these images presented no small obstacle to the spread of the devotion.

Most Sacred Heart of Jesus, Have mercy on us!

St. Maximilian Kolbe was a zealous missionary who travelled around the world to spread the gospel, establishing missions not only in his native Poland, but Japan and India as well.

He had begun a thriving publishing venture both in Japan and in Poland in addition to his pastoral and spiritual work. These publications criticized the Nazis and marked him for imprisonment when the Nazis invaded Poland.

While he was interred in Auschwitz, he minister to his fellow prisoners and when ten randomly chosen prisoners were set apart for execution in retaliation for an escaped inmate, Kolbe volunteered to take the place of one of the victims.

For this and his life of holiness, he was canonized as a "Martyr of Charity," the first in the church's history so designated.

He is shown in a statue on Westminster Cathedral holding a book in which he points to the double crowns of purity and martyrdom which Our Lady had shown to him in a vision.

The location of the grave of Junipero Serra is discovered, now enclosed within a mission shrine in Carmel-by-the-Sea, California. It is seen being honored several days after Serra was canonized by the Catholic Church by Pope Francis in 2015.

One of Junipero's slogans, "Always forward, never back," emphasizes his missionary zeal to spread the gospel. 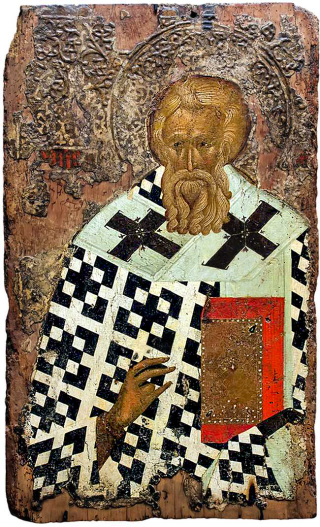 St. Methodius (different than the Methodius who shares a feast with St. Cyril) was a patriarch of Constantinople who sided against the iconoclasts and so is among the many who fought to continue to adorn places of worship with sacred art and icons.

In later centuries, some Protestant reformers adopted positions similar to the iconoclasts of old, banning or severely limiting the use of sacred icons or art in churches. Islam and Judaism also prohibit the use of icons and images in worship.

The Catholic church, deeply sacramental in nature, has embraced the proper use of sacred images and icons as a means of fostering our communion with God and the power of the intercession of the saints. 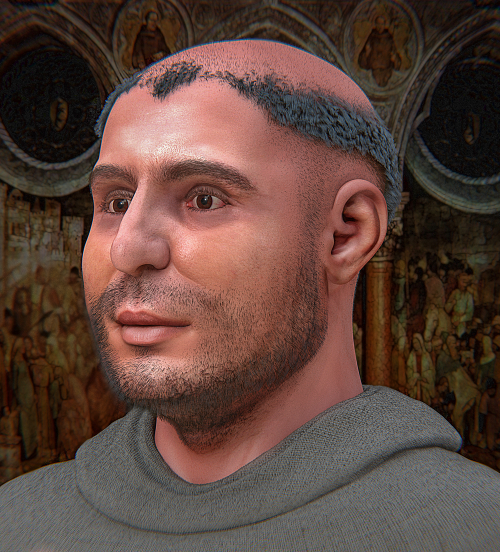 A modern facial reconstruction of St. Anthony based on his skull.

While he is certainly not the image on generations of holy cards and carved in so many statues, the artist has certainly captured a joyful and peacefully spiritual countenance. This is perhaps fitting for a saint who has enjoyed such popularity among the faithful.

Our Lady Help Of Christians

The Knights of Columbus have commissioned an icon of Our Lady Help of Persecuted Christians. She is shown holding the child Jesus with faithful from around the world seeking protection under her maternal mantle. The feast of Our Lady Help of Christians itself was promulgated by Pope Pius VII after his release from imprisonment following Napoleon's defeat at Waterloo.

So many Christians, including Catholics around the world are being persecuted for their faith at peril of their lives. Priests, religious and lay faithful are martyred with barely a notice in the mainstream media. American Catholics are being ridiculed for our beliefs, which are seen by some as disqualifying for juridical or public office.

Mary's protection is still urgently sought to help inspire Christians to speak out against oppression and defend religious liberty around the world. 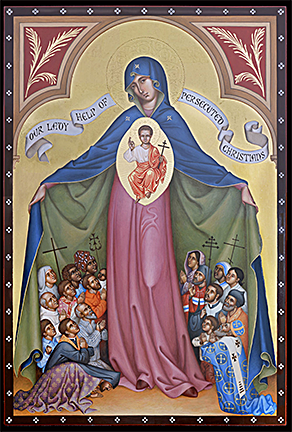 Our Lady Help of Persecuted Christians by KofC 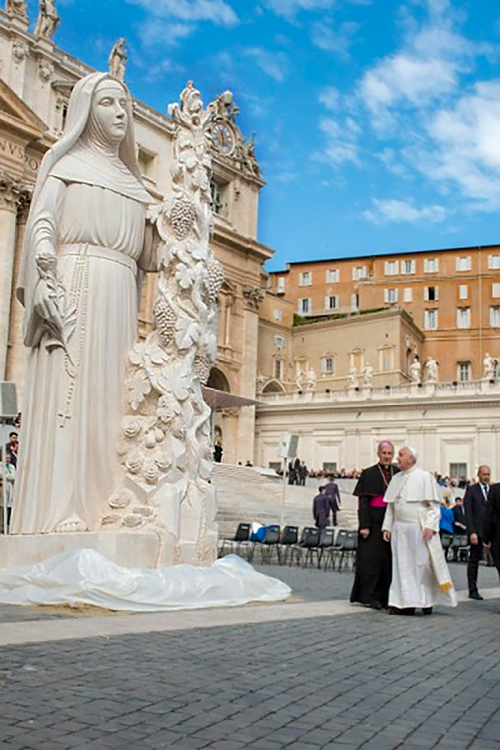 Pope Francis blessed a statue of St. Rita in St. Peter's Square on its way to the place where her relics are held.

St. Rita is the patron saint of hopeless causes and those with headaches. She married at a young age, was a mother of twins, a widow (her husband was murdered), both sons died and she became a religious. She bore her trials with equanimity and remained close to Christ. 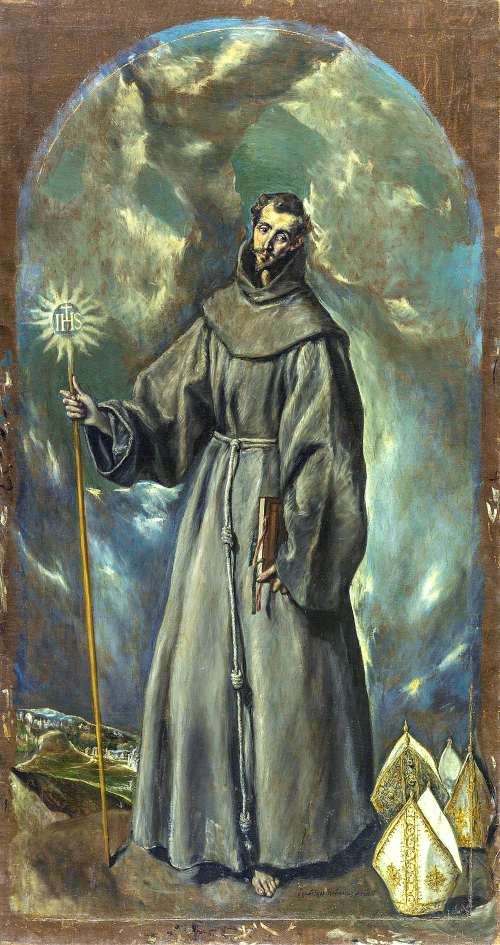 St. Bernadine was apparently short of stature, so I thought he might appreciate this portrait by El Greco, who never painted anyone short in stature!

He developed the well-known "IHS" (the first three letters of "Jesus" in Greek) insignia, promoted popular devotion to the Holy Name of Jesus, baptized many converts and despite a fiery preaching style worked for peace and compromise between warring factions.

Giulia dedicated her entire life to teaching the faith to children and founded the Catechetical Sisters of the Sacred Heart to further that goal. She died the morning after meeting with 100 students preparing for their First Holy Communion.

Pray for our First Communicants and their families who will receive the inestimable grace of the Eucharist tomorrow. 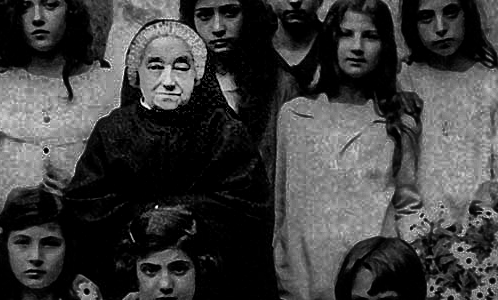 St. Brendan appears as a young boy in our church's windows of St. Ita, who was one of his most influential teachers. He was friends with two other Holy Cross Window Saints, St. Bridget and St. Columba. His efforts to spread the gospel were not limited to monastic settlements nearby, but extended to foundations planted during his missionary expeditions.

According to one Irish legend, he celebrated mass on a remote island which, unbeknownst to him, was the back of a large sea creature.

May our admiration of his courage inspire us to be unashamed of our Christian discipleship. 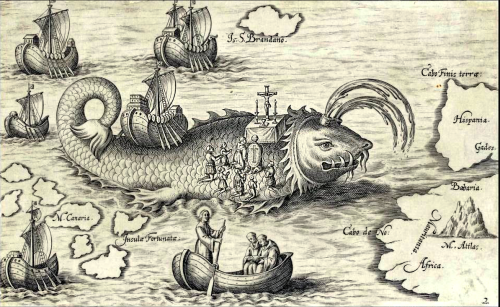 Engraving at Australian Maritime Museum of St. Brendan celebrating Mass on the back of whale.