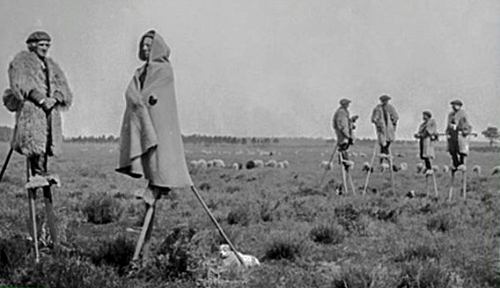 Shepherds on stilts. They’re a thing!

Having preached quite often about The Good Shepherd and his flock, I have read a lot about sheep and shepherds, but I had never seen shepherds on stilts.

In certain areas of France due to the boggy conditions and the high brush, shepherds lashed stilts to their legs, leaving both arms free and would carry a long pole with which they could guide the sheep and even use to make a tripod when they wanted to rest.

Some of the townspeople used stilts simply to walk about. It’s said they could keep up with a galloping horse. The distance record was set in 1891 by a gentlemen who stilt-walked from Paris to  Moscow in 58 days.

Shepherds didn't use the stilts only to ambulate. The stilts gave them a higher vantage point from which they could see approaching predators, otherwise hidden by the underbrush. They used their stilts to protect the flock.

The French countryside has dried out since the late 1800’s and the silt walkers are mostly for tradition and tourists nowadays, but keeping the flock safe is still everyone's responsibility.

I’m sure you will join with me in helping form a Church Security Committee whose members will help us implement some equipment purchases and develop procedures for emergencies of all kinds. What if the fire alarm goes off during mass?  How do we evacuate the church if needed?

As we do this, we’ll publicize locations of the AED and other medical supplies and protocols for orderly movement.

Police, fire, EMS, other first reponders, security, risk management, emergency preparedness planners, teachers are just a few of the many who could make a very helpful contribution to our Committee.

We hope there would be enough interest to have at least several committee members at each mass who are familiar with all the emergency plans, which will be collected in a policy manual.

Ushers and greeters can help play a role. The Diocese has suggested no more than three entrances be open to the church, each of which has two greeters, especially for late arrivals. Help in that regard isn’t all expertise, it’s eyes

I wish enhancing security was as simple as wearing stilts and carrying a stick - it’s more complicated, but simply takes sensible, good planning which I’m sure we can accomplish all working together.

Let us keep the flock safe as we worship our Good Shepherd. 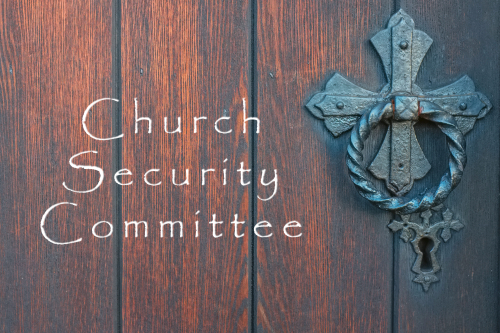 The Committee will work closely with local and state law enforcement and emergency preparedness teams to ensure that Holy Cross Church has clear communication policies and sensible protocols for emergencies.

Our staff is completing various self-assessment questionnaires about our facilities as a first step to begin planning and purchasing any supplies we may lack.

If you are able to help us, especially if you worship at Holy Cross, please call the Parish Office and express you willingness to serve on this important committee.