Care Near the End of Life

In a major boost to opponents of physician-assisted suicide, the American Psychiatric Association has taken a clear stand:

The American Psychiatric Association, in concert with the American Medical Association’s position on Medical Euthanasia, holds that a psychiatrist should not prescribe or administer any intervention to a non-terminally ill person for the purpose of causing death.

According to Bioedge, Dr Mark S. Komrad, of the APA ethics committee, says that “So far, no other country that has implemented physician-assisted suicide has been able to constrain its application solely to the terminally ill, eventually including non-terminal patients as legally eligible as well,” says Dr Komrad. “This is when psychiatric patients start to be included.”

This is a perfect example of the slippery slope argument, which far from being theoretical, has already been shown to lead to dangerous broadening of the laws restricting physician assisted suicide.

This is a welcome decision indeed.

Posted at 11:49 AM in Care Near the End of Life, Catholic Bioethics, Current Affairs, Respect Life, Suicide | Permalink | Comments (0)

Not exactly perfect timing is it?

Once again a physician-assisted suicide bill is being sponsored and voted on in the Jersey legislature. The Diocese of Trenton has assembled some resources which they have asked to be made available to parishioners through social media.

The most important thing for Catholics to do is become informed about the dangers of physician-assisted suicide and then inform our elected officials of our opposition to what is being called "state sanctioned suicide."

Having worked against and spoken out against physician assisted suicide since the 90's, I've seen the political and social landscape truly shift from those days.

Some arguments against it have become weaker

More states have passed physician-assisted suicide, falsely allaying fears that legalizing assisted dying will open the floodgates of death by medication. The use of the slippery-slope argument against aid in dying has never been too effective even though more evidence has accumulated from the experience of European nations how quickly the initial restrictions placed on the practice are loosened.

More testimony has been sought from speakers afflicted with illness which has made them consider and then reject assisted dying for themselves. While their personal testimony is poignant, proponents of aid in dying acknowledge, then dismiss it, asserting that the "right" to assisted dying should be offered to those who choose it.  I remember a seminar at which Christopher Reeve's mother speaking with tears in her eyes advocated the unrestricted use of human embryos for medical research, "Don't take away hope." The dramatic YouTube video of the fourteen year old Wisconsin girl who pleaded successfully to be allowed to die was credited with helping pass California's aid in dying legislation. The use of personal testimony is emotionally powerful on either side of the argument. In my view, it should be used sparingly, if at all.

So many more challenges have been brought to any moral absolute with dramatic success under the Obama administration. Gender, biology and choice have been blended into a spectrum. The right of an individual to choose almost anything has been broadened, except the right to object to policies which silence those espousing traditional Christian values.

Some arguments against aid in dying have become even more cogent

Health care has become more controlled by private and government insurers that are becoming reluctant to pay for life-prolonging treatment deemed futile or not cost-effective. This should alarm everyone. While prudent decisions must be made, they shouldn't be made by a board or trustees, or a government bureaucrat. The patient, the family, their physicians and caregivers should also be involved in clinical care decisions and making public policy.

An increasing number of physicians have become comfortable with the idea of offering physician assisted suicide to their patients. Some of them put their obligation to serve their patient's needs and wishes above their own personal judgement or without recourse to any other source of moral or legal obligation. While many physicians feel the intrinsic ethics of medical practice forbid physician assisted dying, some embrace it as part of the obligation they owe to their patients who choose it. Many people no longer fear that doctors can help them to die.

The Church's teaches that extra-ordinary medical care may be refused or discontinued if already begun. This  along with  priority for treating pain, even if the pain medication brings deleterious effects-including hastening death allows for merciful and dignified care near the end of life without recourse to physician-assisted suicide. 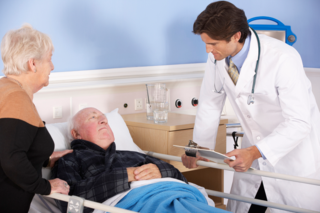 A study published in the American Journal of Oncology (May 23, 2016) and highlighted by Bioedge reports the hardly surprising news that patients come to a clearer understanding about the prognosis of a fatal cancer after honest and effective communication with their doctors.

Such communication may not be frequent or effective enough, however.  In this study only 5% of the terminally ill patients at the beginning of the study understood the gravity of their diagnosis. This improved over the six week period in which they were given more informed details about their disease and the likely outcome of chemo or other therapies. The authors of the study rightly worry that without such information, a person may not be able to make timely and appropriate plans for medical care especially hospice.

Patients may not have the information they need for many reasons: they do not ask; family or physicians are reluctant to tell them; many of the clinicians, caregivers, family or patient may harbor unrealistic expectations of the outcome; fractured lines of communication between specialists and primary care physicians; fear of removing all hope from the suffering.

The authors of the study report conflicting evidence in the literature about the effects of accurate prognostic information on patients' peace of mind and equanimity. Some studies have reported the troublesome reactions we fear when we conspire not to tell someone about the dire nature of their diagnosis, while others report no harm to the psychological or spiritual well being of either the patient or those involved in such direct communication.

The study concludes that accurate, ongoing and  recent communication with oncologists and physicians can inform realistic decisions about end of life care in terminal cancer patients.

How does one balance hope and realistic acceptance? It is surely a spiritual discipline we can practice every day of the Christian journey, especially during times like Lent and around the time of mourning the death of a loved one or friend.

How and when to have these discussions needs prayer above all. The Sacrament of the Sick can be an important help to the dying and their loved ones in not only drawing strength from the presence of Christ and the Holy Spirit, but with wisdom, prudence and courage.

Posted at 05:31 PM in Care Near the End of Life, Food for Thought, Respect Life, Sacrament of the Sick | Permalink | Comments (0)