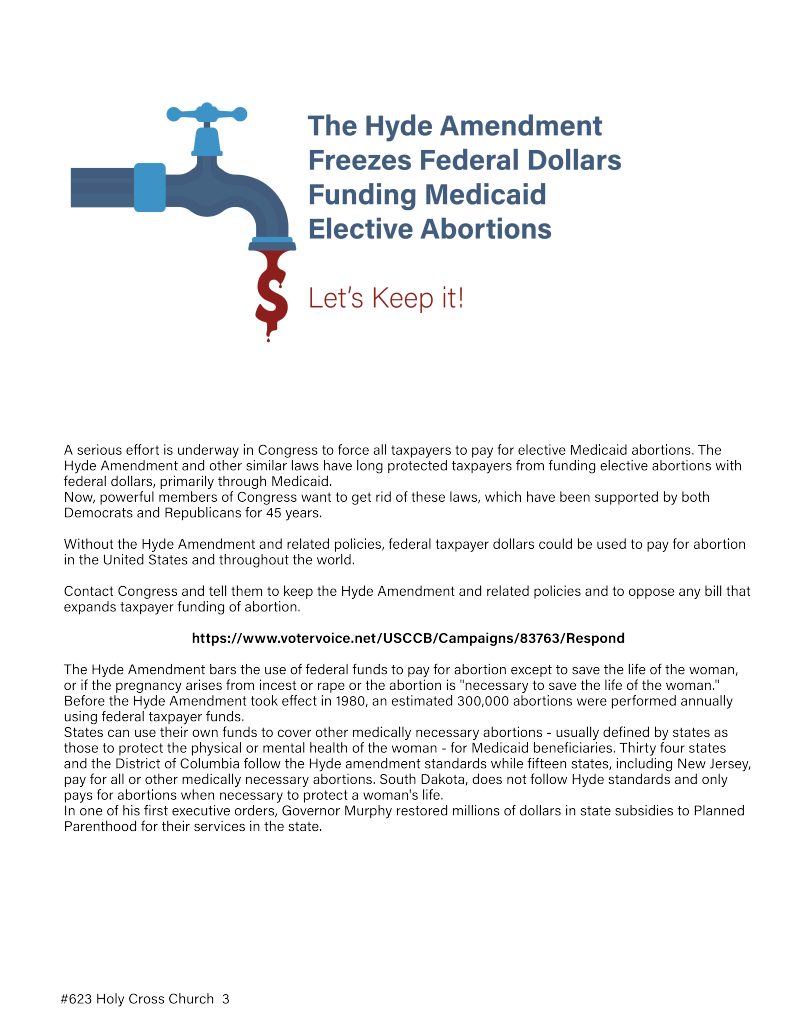 Just before today's storm, I snapped a few pictures of the bloomers and survivors in the rectory garden.

Sadly, two large forsythia bushes were lost to forsythia gall disease, which I had never heard of until this season. I thought any plants which can grow so vigorously in Brooklyn would be invulnerable to disease. There's no practical treatment and experts don't even recommend planting new forsythia in the same place, since the disease may be present in the soil. I'll look for a replacement(s) after Mother's Day. 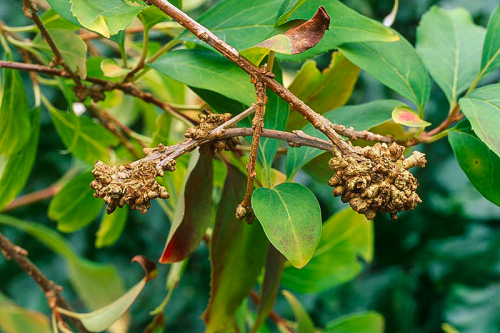 Also, a large Clematis paniculata bit the dust. I'm not sure what did it, although the load of snow and ice during winter storms may have broken the stems. There isn't even any new growth from the roots. This is the plant that has basically colonized the groundcover in the parking lot!

All the rugosa roses have done really well and are spreading and the various others look quite healthy too. The red and the yellow knockouts got a severe pruning but are budding vigorously.

I can never complain about the nepeta! It looks like all present and accounted for and then some. I have a white variety coming soon to try.

I haven't been too successful with Lamb's Ear , but this small plant has multiplied over the fall and winter months. 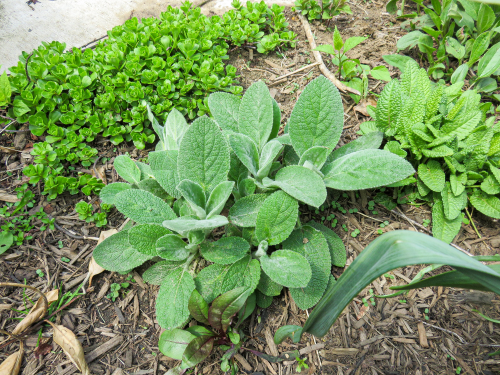 Tulipa tarda are interesting bulbs. They're only a few inches tall and open and close each day in bright sunlight. They closed up right before this afternoon's rain. 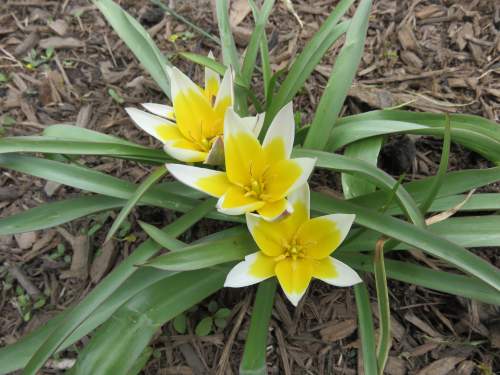 Not only are the narcissus bright and cheerful, but quite fragrant too, appearing a bit later than the daffodils, which are nearly spent. The blue muscarii and yellow daffodils aren't quite in synchrony this year, but the color contrast is present nonetheless. The First Sunday after Easter is now known as Divine Mercy Sunday, but in the Latin rite it was called Quasi Modo Sunday after the first two words of the opening prayer in the Latin Mass. Quasi modo or "similar to the manner of" newborn infants crying out for their mother's milk, as the prayer continues.

Victor Hugo named the Hunchback of Notre Dame Quasimodo because he was discovered abandoned as an infant on the steps of Notre Dame Cathedral on Quasi Modo Sunday.

We have become new creations in Christ yet still need to cry out for God's mercy and the sustenance of the Eucharist. Alleluia! 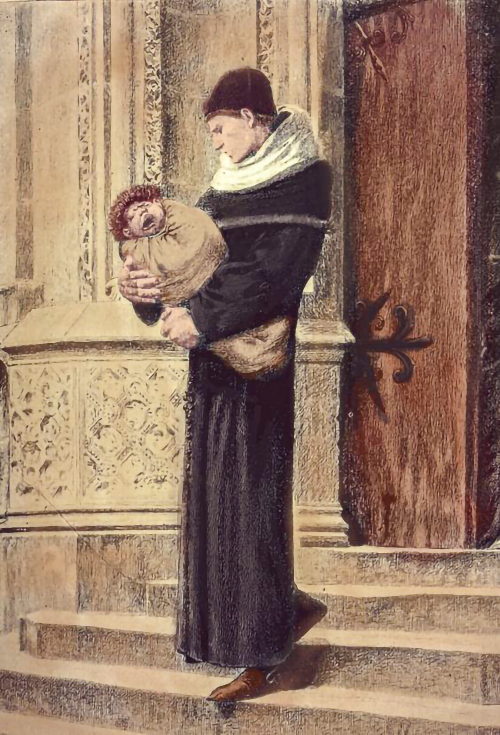 A mid nineteenth century painting showing the discovery of Quasimodo on the steps of Notre Dame. 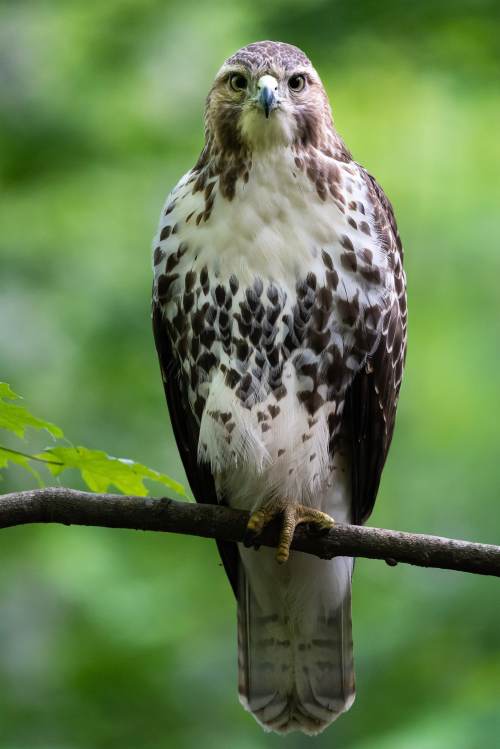 As I prepared for Mass this morning, I felt as if everything has already been done. What more can we do today? Then I spied a hawk, perched on the schoolyard fence - an unusual spot for any bird to select, but unusually quiet today. It was motionless, set at an angle to survey the entire flat, grassy field. And it sat, and sat for minutes on end, patiently waiting for breakfast to appear or perhaps just to rest before a busy day of foraging.

After the great feast of Easter, we must be patient, watchful, alert for the Lord. The hawk might have appeared to be doing nothing, but was actually quite busy. Hawks would be great at prayer. 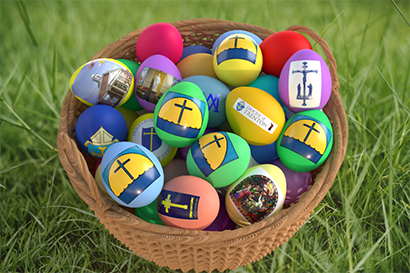 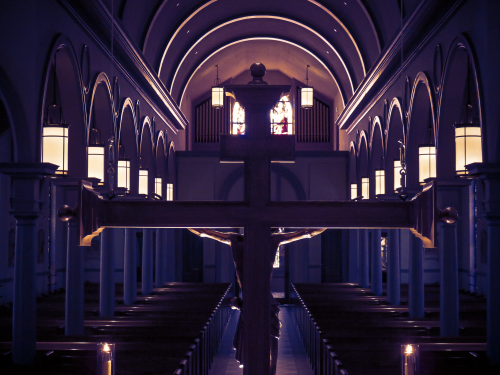 Good Friday 3:00 PM The Passion of the Lord In Church Live-Streamed Service with Holy Communion 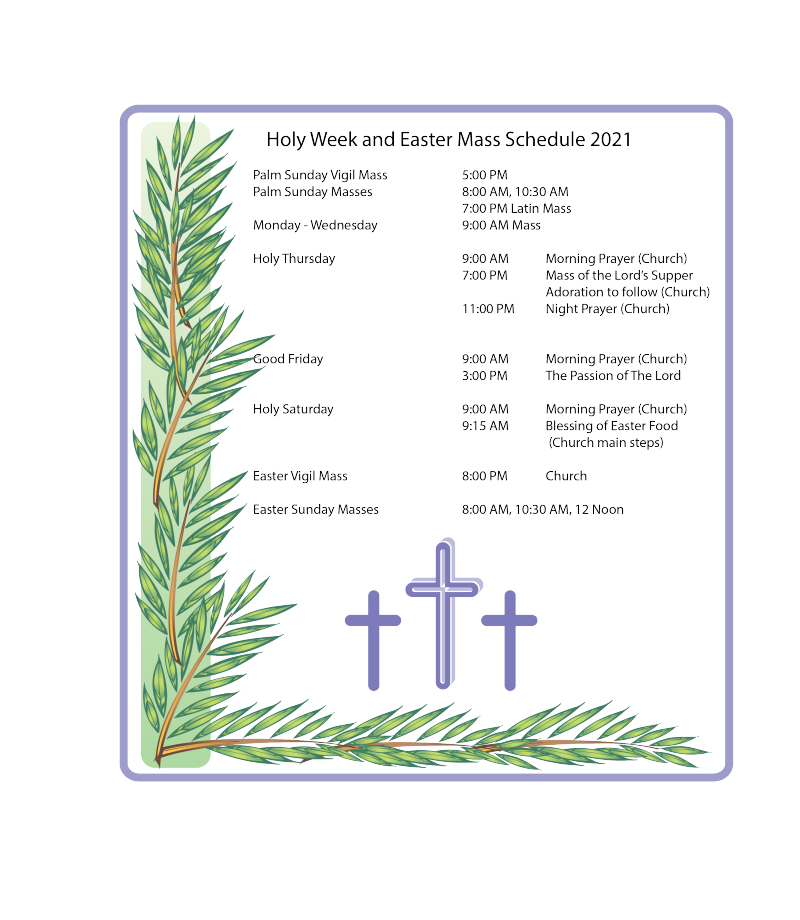 Holy Thursday: The Eucharist and A Commitment 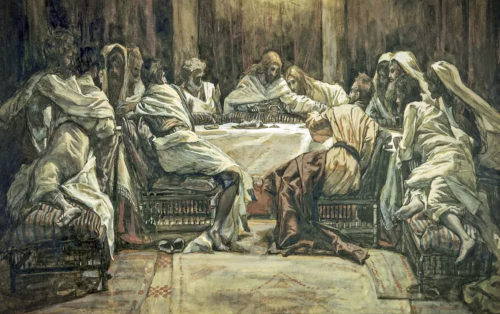 Another painting by James Tissot, this one of the Last Supper using imagination from a Jewish perspective. We focus attentively and gratefully on Jesus' actions at the supper table, but his final commitment to His Father's will was to take place later that evening in Gethsemane. 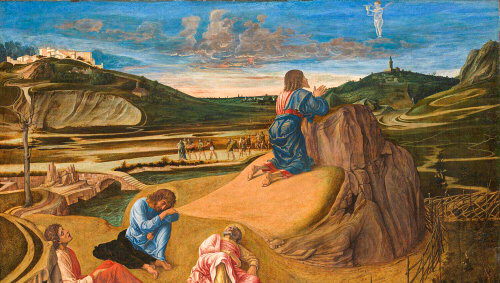 Bellini's Agony in the Garden, centuries earlier,  emphasizes the storyline of events from a third party's perspective. There isn't much concern for Christ's inner thoughts. Nor does there appear to be very much agony. We should spend some time with Jesus tonight in private prayer, small recompense for the sleepy indifference of his inner circle.