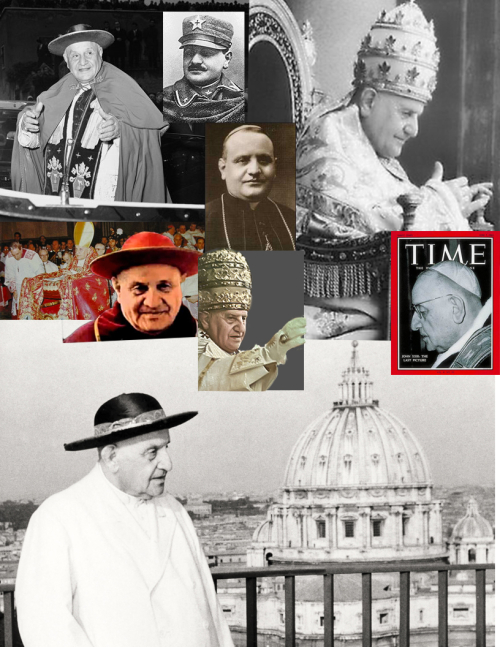 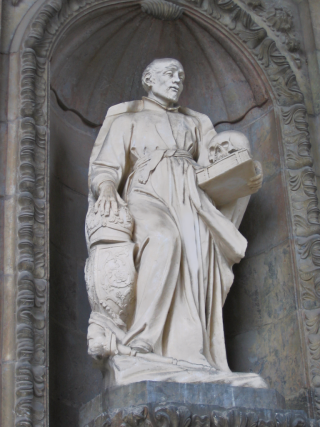 Yes, those Borgias. If I am reading the family tree correctly, he was the great-grandson of Pope Alexander VI. Francis enjoyed great success in the royal and ecclesiastical politics of the day, marrying a Portuguese noblewoman and becoming a close advisor to the Holy Roman Emperor. Upon the death of his wife after more than a decade of marriage and eight children, he decided to renounce his royal succession and become a Jesuit priest.

His ascent in the Jesuits was no less notable. He was eventually elected the third Father General of the Order after Ignatius. His administrative skills were put to worthy use by the Jesuits though he was still sought for counsel by kings and popes. Francis, however, preferred a quiet life of prayer. He founded a school in Rome which would eventually become the Gregorian University.

Saint John Leonardi was a diocesan priest, originally trained as a pharmacist, who ministered in the Church during the Catholic Reformation and The Council of Trent. As he began to pastor a parish, a group of young men gathered around him whom he helped realize their vocations to priesthood. A group of reform-minded clergy also formed around him and despite difficulties he organized them into a community which received recognition from the Church early on, but aroused the suspicion of the local government in the politically charged days of the Counter Reformation, which saw the foundation of too many religious communities in their view.

His community was eventually named the Order of the Mother of God. Here is St. Pope John Paul's description of his life and works at the Church he had been given to pastor in Rome:

Problems abounded. Indeed, the structural condition of the church and annexed buildings was precarious and in such a state of dilapidation that it looked like "a shepherd's cottage or hut". The flooding of the Tiber gave rise to an unhealthy humidity and dangerous infections which, in 1609, caused the death of many religious, including the founder himself. This prompted the Order, at the Congregation that met to elect St John Leonardi's successor, although reasserting the determination to remain in "that church of so great a devotion", to give an account of their difficult situation to Pope Paul V, asking him "for some other retreat, where they could care for the sick and seek shelter in the dangerous weather" (A. Bernardini, Croniche, parte III, p. 6).

A few years later, the Pontiff Alexander VII, recognizing that the site of the church of Santa Maria in Portico was "too remote from trade and equally sordid and vile, in short not at all suitable", built the church of Santa Maria in Campitelli in one of the most beautiful and characteristic places of Rome, where this religious family established its General Curia more than three centuries ago. In 1662, the image of Our Lady Romanae Portus Securitatis was moved to the new Church, which thus acquired the name of Santa Maria in Portico in Campitelli.

Pope Benedict XVI remarked on his life as a pharmacist-turned-priest:

"...he never lost his passion for pharmacology; he felt that his profession as a pharmacist would serve as a bridge that would allow him to fulfill his vocation more fully, dispensing to men through a holy life “God’s medicine,” which is Jesus Christ who was crucified and who rose again, “the measure of all things.”

Mankind, he stated firmly, has an extreme need for Christ because he is our “measure.”

“Christ or nothing!” — this was his prescription for every kind of spiritual and social reform.

He was named patron saint of Pharmacists in 2006, a profession which needs to strength of Christ to resist the modern challenges of prescription abortifacients and becoming integral to the physician assisted suicide movement. In no small measure, they are also challenged to help find workable solutions to the opioid epidemic which engulfs us.

Here are more photos of the Living Rosary which give a different perspective of the liturgy itself. The children group into five decades and each wears a distinctive color chosen for that particular decade. There are usually several children making up each "bead." The framework of the rosary is a plastic chain with the appropriately colored beads, consisting of plastic hoops.

A group of 8th grade boys carry the cross to each "bead" along with a microphone which transmits the beginning of their prayer over an outdoor speaker system to enable the other children to know when to join in with the second part of the Hail Mary, The Our Father, or the Glory Be. 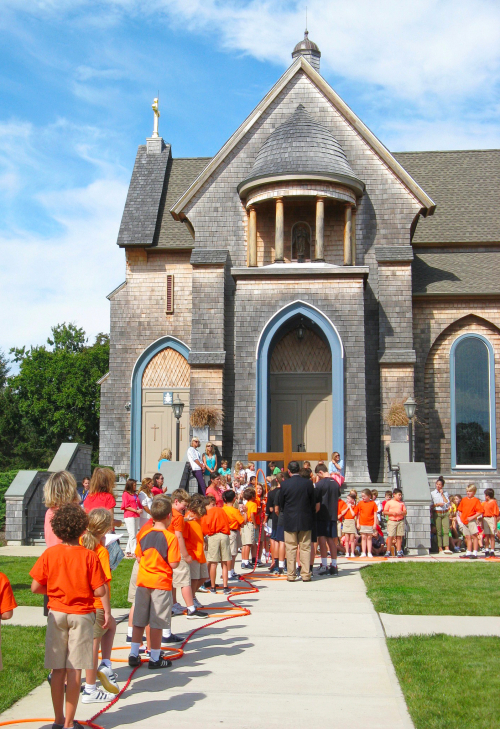 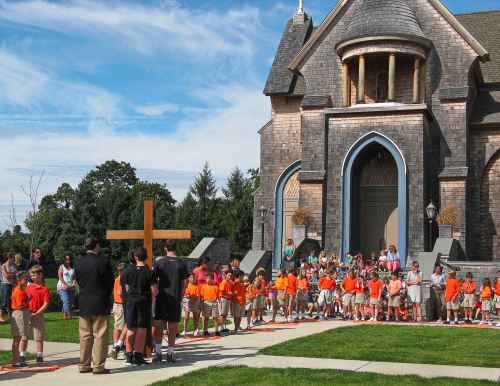 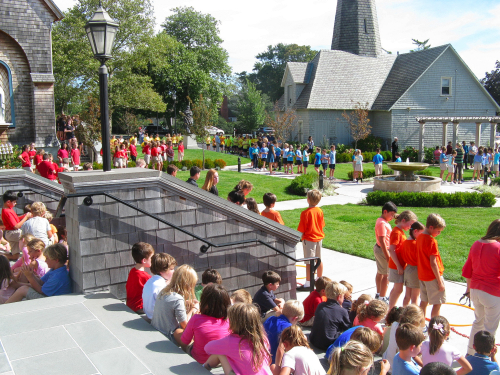 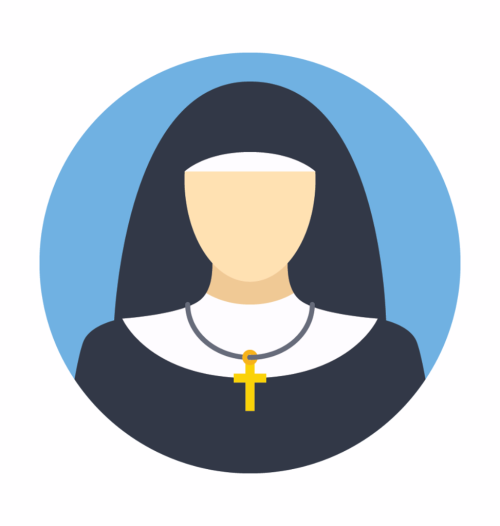 The US Bishops hailed the Trump administrations new regulations which restore more broad exemptions from the contraceptive mandate of the Affordable Care Act to religious groups and organizations.

This should finally allow the Little Sisters of the Poor and other groups who have been challenging the regulations to come to reconciliation.

The USCCB's statement regarding the broadening of the exemption read in part:

"Such an exemption is no innovation, but instead a return to common sense, long-standing federal practice, and peaceful coexistence between church and state. It corrects an anomalous failure by federal regulators that should never have occurred and should never be repeated.

"These regulations are good news for the Little Sisters of the Poor and others who are challenging the HHS mandate in court.  We urge the government to take the next logical step and promptly resolve the litigation that the Supreme Court has urged the parties to settle.

"The regulations are also good news for all Americans. A government mandate that coerces people to make an impossible choice between obeying their consciences and obeying the call to serve the poor is harmful not only to Catholics but to the common good. Religious freedom is a fundamental right for all, so when it is threatened for some, it is threatened for all. We welcome the news that this particular threat to religious freedom has been lifted...."

The Lord's Vineyard, Not Our Own Beside the warning to the

Of the Kingdom of God

Will be taken away from them

There is also an implicit warning to us:

What are we doing with the vineyard?

There are the many homilies

Written now that turn this into

Praise of ecology and reverence

That seems to miss the mark

Since the issue in the parable

Wasn’t how the vineyard

Was being taken care of

But that the tenants refused to

Honor their agreement with

The owner and give him

His percentage of the produce.

If the kingdom is God’s,

Then whether or not the tenants

They are selfish and greedy.

They haven’t spoiled the vineyard,

We shouldn't spoil the vineyard

But we should especially

Understand that it belongs to God

Not to any individuals.

We owe a debt

This can be humbling

Because we repay a debt

To God on our knees

In prayer and gratitude

Before we repay it to others

Perhaps in a public display

In a private gesture outside

The glare of publicity.

Even if we credit ourselves

More than lucky in our produce farming,

Our skills, our talents

and our passions were given us

It can help stir our conscience

And motivate our generosity

So can give out of virtue,

But that we didn’t

Saint Bruno, Founder of The Carthusians 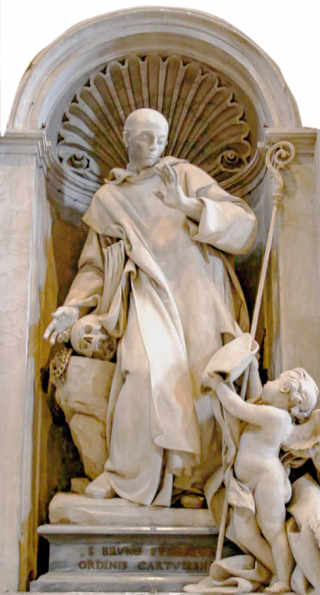 Saint Bruno founded a unique form of religious life, a way of being alone - together.

Carthusians live in individual cells with their own workshop, study, oratory and garden but eat some meals and pray sometimes in community.

Their entire day is arranged around praying, working, reading and studying for God.

Bruno was a successful administrator, scholar and advisor, but longed for a more private life to which he returned even when repeatedly called out of seclusion by a former student who became pope and needed his advice.

Bruno is shown in this statue declining nomination as a bishop and with a skull to remind him of the fleeting nature of earthly honors and pleasures.

It is a peculiar phenomenon that the very busy often find the advice of the very quiet very valuable.

It has been a tradition at Holy Cross to pray a rosary outdoors during the month of October, Mary's month. This year's Living Rosary was prayed in our prayer garden during a beautiful, sunny, summer-like afternoon. The children were reverent and well prepared. The support of their teachers and parents helped make the day especially prayerful. Thanks to the photos from Teresa Makin, our school's Director of Public Relations. 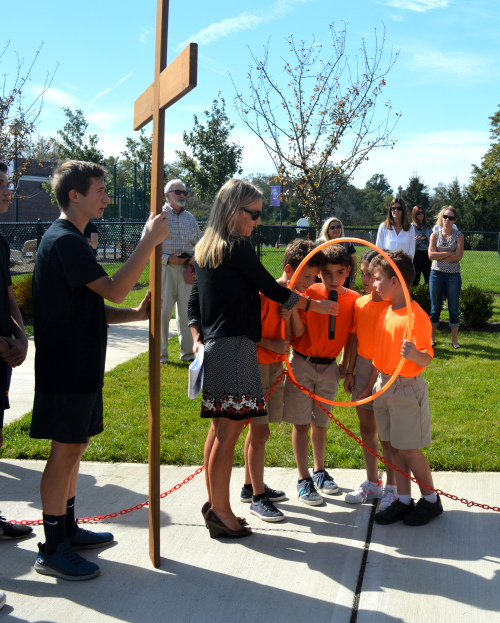 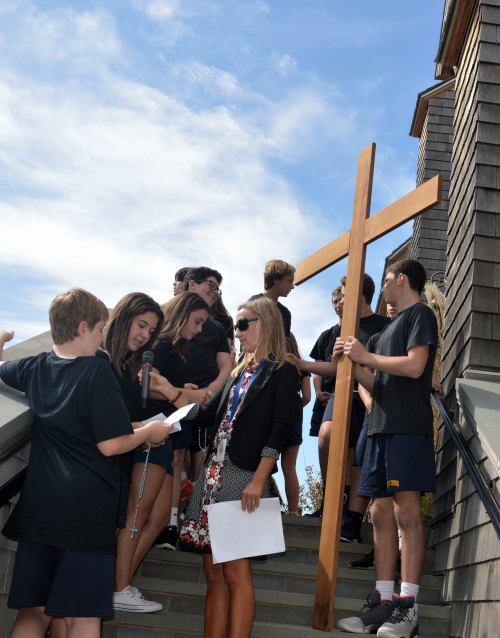 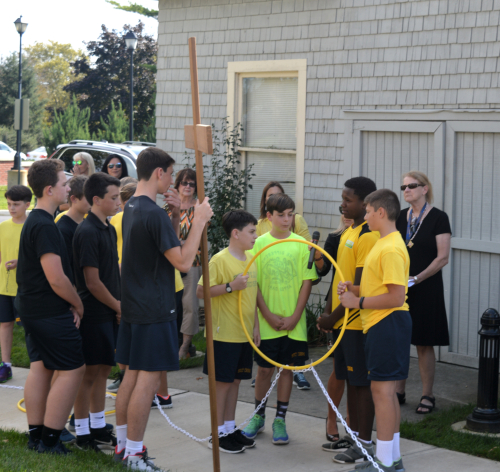 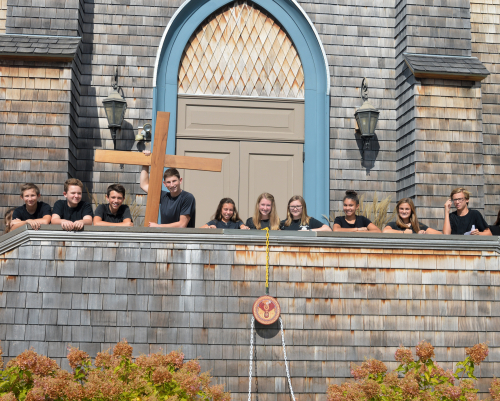 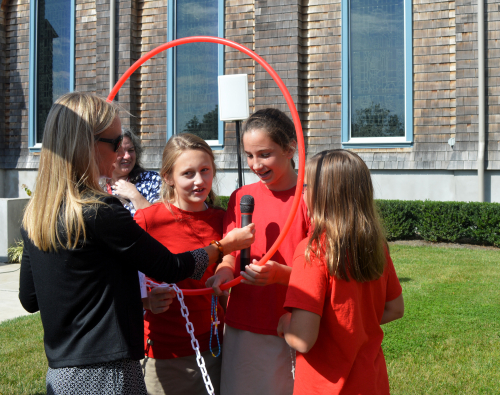 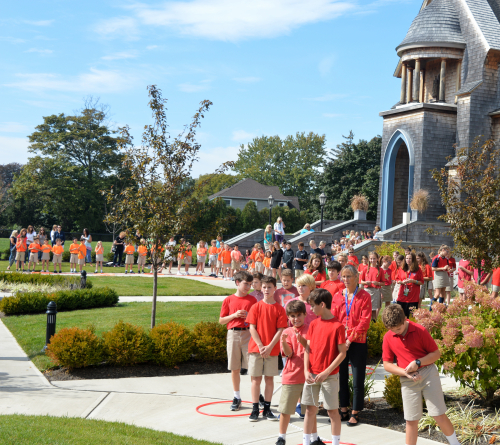 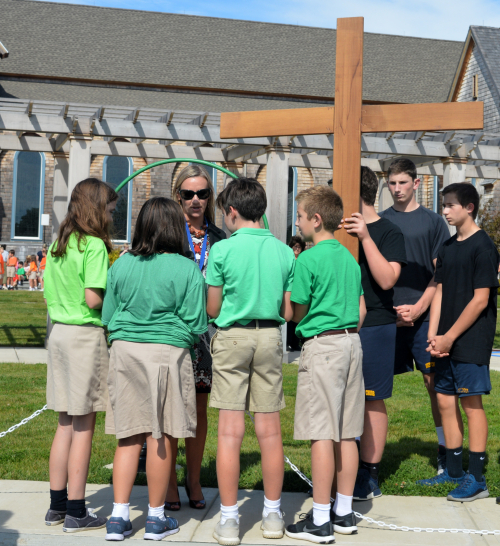 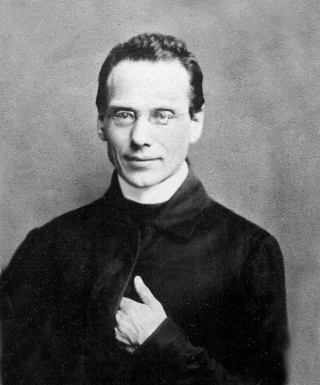 A missionary to the German immigrants to the United States, but serving all God's people, Francis Xavier Seelos entered the United States around the time of Civil War, the "Know Nothing" Anti-Catholic movement and the rise of American Nativism in the US Church.

Initially an associate pastor with St. John Neumann in Philadelphia, he soon rose to a prominent leadership position in the Redemptorists and the Church, even declining nomination to become a  bishop.

He served as a tireless missionary in parishes throughout the states, finally succumbing to Yellow Fever at the age of only 48. Many healing miracles were reported both before and after his death. St. Francis is famously pictured preaching to the birds and St. Anthony of Padua to the fishes. Undoubtedly both these saints loved God's creation, but both these sermons were meant for people who rejected the preacher and his message. Only the birds and the fish would listen.

Today it is important to remember St. Francis' radical message of discipleship and his love for nearly everything but money, especially his love for Christ crucified and those cast aside by society.

Let us resist the effort to turn Francis into a kind of modern eco-friendly saint who cared for the birds more than the poor.

Blessing of the Animals 2017 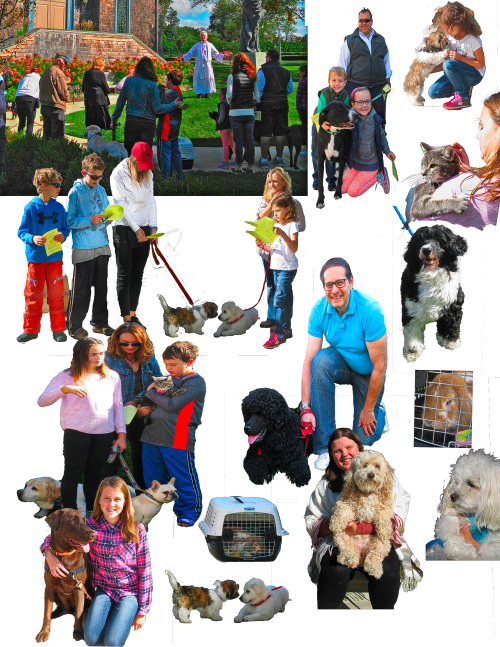 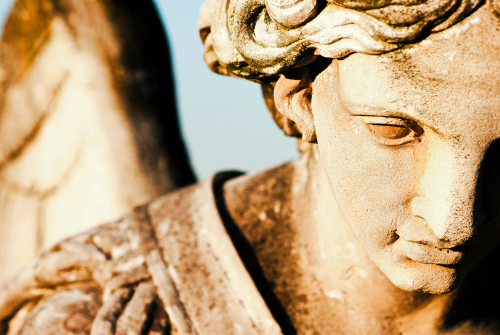 Most images of Guardian Angels are whimsical

Cards depicting them have glitter, lots of glitter

I hope my Guardian angel is strong

sure of foot in storms