Tradition holds that St. Francis of Assisi was one of the first to create and display a Christmas creche in order to teach the joy and meaning of Christmas. This is a scene from one of our windows. In the complete panel, Francis is shown leading the children to the Christ child. 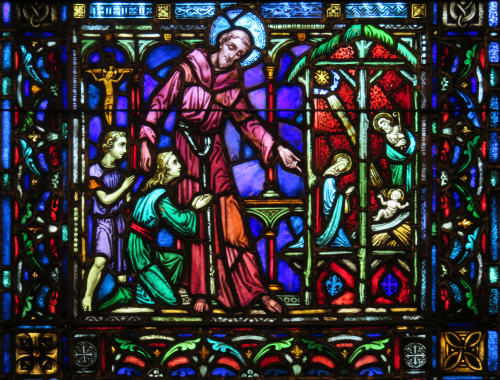 In a major boost to opponents of physician-assisted suicide, the American Psychiatric Association has taken a clear stand:

The American Psychiatric Association, in concert with the American Medical Association’s position on Medical Euthanasia, holds that a psychiatrist should not prescribe or administer any intervention to a non-terminally ill person for the purpose of causing death.

According to Bioedge, Dr Mark S. Komrad, of the APA ethics committee, says that “So far, no other country that has implemented physician-assisted suicide has been able to constrain its application solely to the terminally ill, eventually including non-terminal patients as legally eligible as well,” says Dr Komrad. “This is when psychiatric patients start to be included.”

This is a perfect example of the slippery slope argument, which far from being theoretical, has already been shown to lead to dangerous broadening of the laws restricting physician assisted suicide.

This is a welcome decision indeed.

Posted at 11:49 AM in Care Near the End of Life, Catholic Bioethics, Current Affairs, Respect Life, Suicide | Permalink | Comments (0)

Our Christmas tree lighting and manger blessing along with the sheep (and goats) and Joseph and Mary with donkey were perfect. After we sang, listened to Scripture and reflected, we braved the outside temperatures to bless the manger, light the tree and head quickly over to the gym where there were hot refreshments and goodies awaiting one and all.

Thank you so much to everyone who helped set up and plan for the evening which was well attended and joyful. 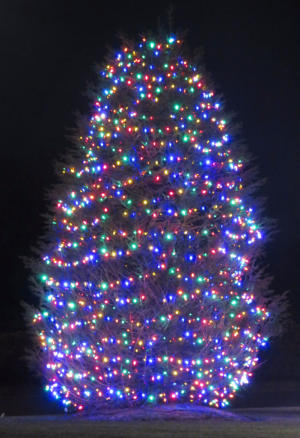 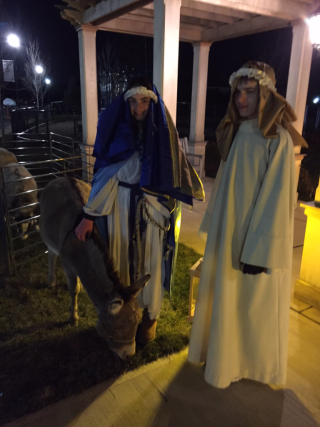 Joseph, Mary and Dominick the Donkey

Not exactly perfect timing is it?

Once again a physician-assisted suicide bill is being sponsored and voted on in the Jersey legislature. The Diocese of Trenton has assembled some resources which they have asked to be made available to parishioners through social media.

The most important thing for Catholics to do is become informed about the dangers of physician-assisted suicide and then inform our elected officials of our opposition to what is being called "state sanctioned suicide."

Having worked against and spoken out against physician assisted suicide since the 90's, I've seen the political and social landscape truly shift from those days.

Some arguments against it have become weaker

More states have passed physician-assisted suicide, falsely allaying fears that legalizing assisted dying will open the floodgates of death by medication. The use of the slippery-slope argument against aid in dying has never been too effective even though more evidence has accumulated from the experience of European nations how quickly the initial restrictions placed on the practice are loosened.

More testimony has been sought from speakers afflicted with illness which has made them consider and then reject assisted dying for themselves. While their personal testimony is poignant, proponents of aid in dying acknowledge, then dismiss it, asserting that the "right" to assisted dying should be offered to those who choose it.  I remember a seminar at which Christopher Reeve's mother speaking with tears in her eyes advocated the unrestricted use of human embryos for medical research, "Don't take away hope." The dramatic YouTube video of the fourteen year old Wisconsin girl who pleaded successfully to be allowed to die was credited with helping pass California's aid in dying legislation. The use of personal testimony is emotionally powerful on either side of the argument. In my view, it should be used sparingly, if at all.

So many more challenges have been brought to any moral absolute with dramatic success under the Obama administration. Gender, biology and choice have been blended into a spectrum. The right of an individual to choose almost anything has been broadened, except the right to object to policies which silence those espousing traditional Christian values.

Some arguments against aid in dying have become even more cogent

Health care has become more controlled by private and government insurers that are becoming reluctant to pay for life-prolonging treatment deemed futile or not cost-effective. This should alarm everyone. While prudent decisions must be made, they shouldn't be made by a board or trustees, or a government bureaucrat. The patient, the family, their physicians and caregivers should also be involved in clinical care decisions and making public policy.

An increasing number of physicians have become comfortable with the idea of offering physician assisted suicide to their patients. Some of them put their obligation to serve their patient's needs and wishes above their own personal judgement or without recourse to any other source of moral or legal obligation. While many physicians feel the intrinsic ethics of medical practice forbid physician assisted dying, some embrace it as part of the obligation they owe to their patients who choose it. Many people no longer fear that doctors can help them to die.

The Church's teaches that extra-ordinary medical care may be refused or discontinued if already begun. This  along with  priority for treating pain, even if the pain medication brings deleterious effects-including hastening death allows for merciful and dignified care near the end of life without recourse to physician-assisted suicide. 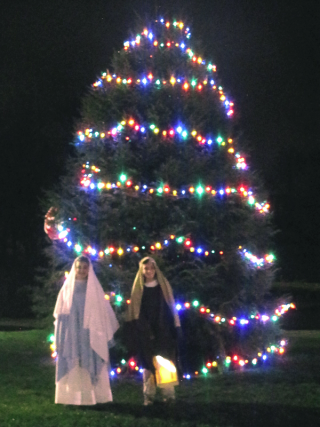 A Christmas Tree of the Past

Join us tonight at 7 PM for the festive formal beginning of the Christmas season at Holy Cross.

Gather in the church for song, a Scripture reading and reflection, followed by the lighting of our Christmas tree on Ward Avenue and the blessing of the Manger at the pergola.

Every year the sheep and other live animals create extra interest for our younger children.

Enjoy hot chocolate and other refreshing goodies in our gymatorium immediately after the blessings.

(We'll adapt to the weather conditions if necessary and not spend too long in blustery winds or really cold temperatures.

It was such a blessing hosting the Dominican Sisters of St. Cecelia on Sunday and Monday. Sister Mary Michael and Sister Mary Emily were delightful and spirit-filled. Sister Mary Michael spoke with all our school children on Monday. As you can imagine, the children had many questions for the sisters. One of my favorite was “What are those chains hanging down from you?” (The full-size rosaries as part of their habits.”) It surprised me that the boys had as many questions as the girls. Our hope is that the sisters sowed seeds of curiosity and admiration of their dedication to Christ and His Church. I loved how sister encouraged all the children to “Keep listening for God.”

Thank you to everyone who showed the sisters such gracious hospitality during their brief stay.

Those who set up the refreshments for their evening talk, the Ramos family for hosting the sisters at dinner and Mrs. Lori LaPlante for arranging their itinerary, lodging and transportation. Thank you to those families who made a sacrifice to attend the presentation on Monday evening and to those who purchased one of the books.

Thank you to all our talented musicians, choir members and soloists and especially our Music Director, Don Carolina for another spectacular performance of Handel's Messiah. 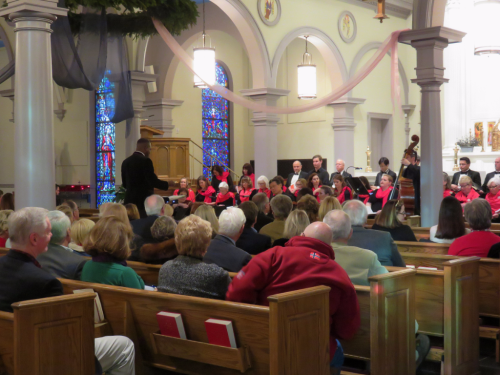 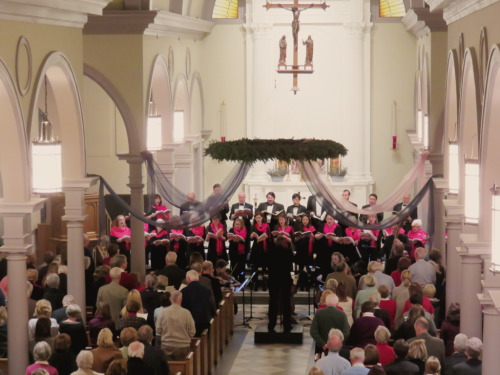 All Stand For The Alleluia Chorus 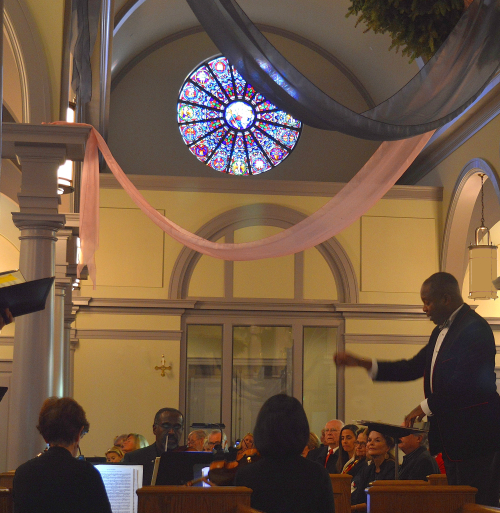 A trial run of our Sunday Mini Office will happen after the 10:30 AM Mass this weekend. Mass cards (the new calendar year will be open), Memorial Candles, Parish Registration forms along with information about scheduling a Baptism or Wedding at Holy Cross Church will be available along with a staff member and a volunteer to help you.

Look for the setup in the North Transept cry room with its new St. Francis windows.

Just a reminder (including to myself!) that there is an early morning Mass tomorrow in addition to the regularly scheduled 9 AM Mass.

The immediate purpose of the early morning mass is to allow families to attend mass together before the work and school day begins.

Its timing also follows in the strong tradition of the traditional First Friday devotions to the Sacred Heart. This devotion was promoted by the private revelations of St. Margaret Mary Alacoque who spoke of twelve promises relayed to her by Jesus during apparitions. The tradition of  making nine First Fridays probably stems from the use of that number for special novena prayers. 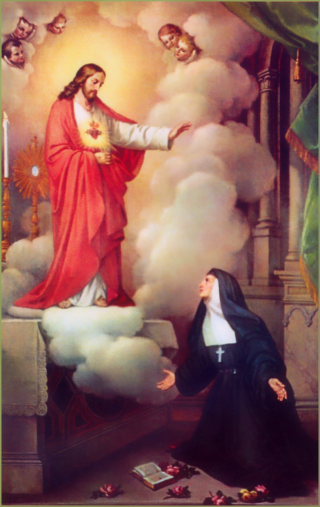