A few more parishioners have responded to our survey asking whether or not we should continue catechetical preaching one per month at Holy Cross. 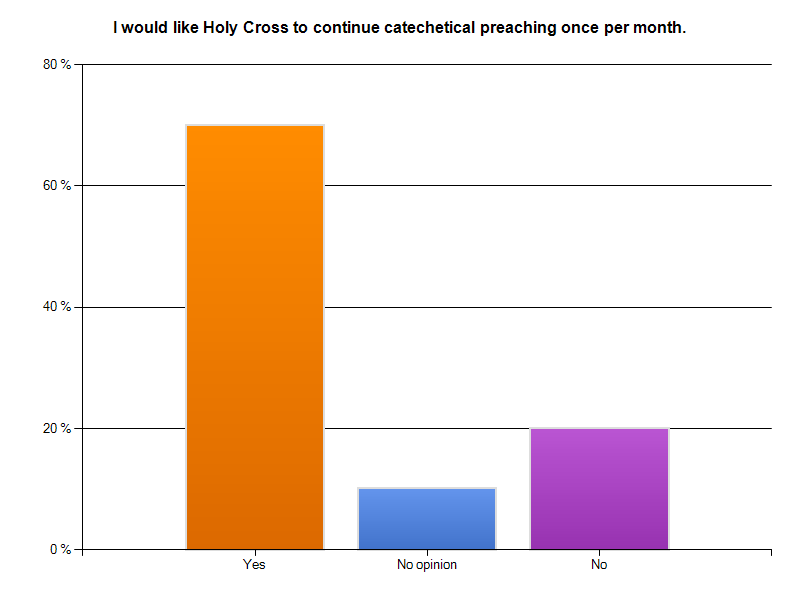 Some Winter to Spring Imagination

Just because it's been a little cold and the gardens are finally started to freeze at night, let's imagine the Prayer Garden around the new church, especially since it's been graded and filled.

Much of the property surrounding the church will be very alive with vegetation, but the heart of the garden will be here, nestled under the southern transept along the southern wall of the church.

Can you see it yet? 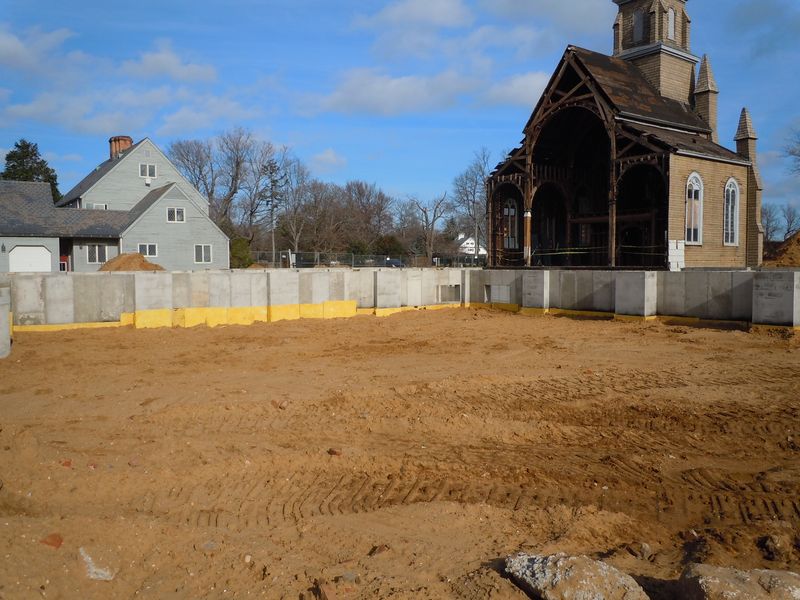 As soon as we have been able to photograph all the stained glass pieces, we will post a catalog online. The catalog will have a thumbnail of the photograph with a link to the larger jpg, the measurements of the piece and the sale # assigned by Beyer Studio.

This should help everyone become acquainted with the offerings before the doors open at 11 AM on December 7th. 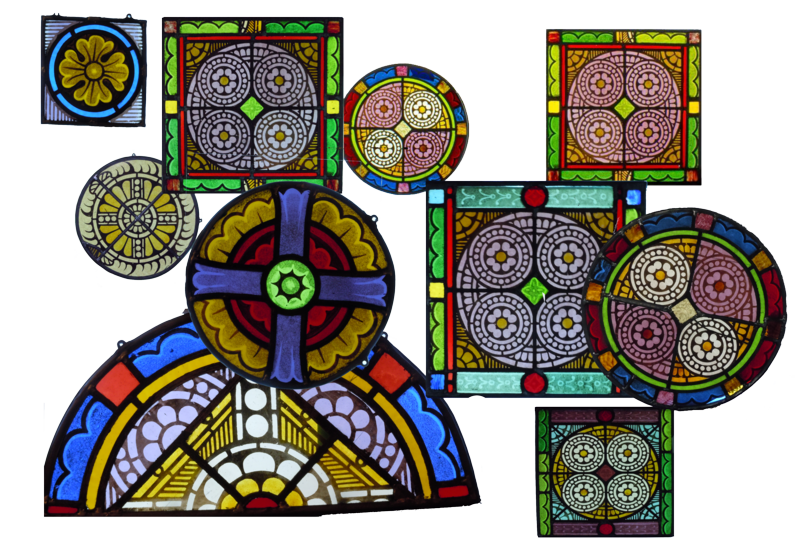 Fire at the Former St. Francis of Assisi Church in Germantown, Philadelphia

GERMANTOWN - November 26, 2013 (WPVI) -- The Philadelphia Fire Department has been called to a church fire in Germantown.

The fire broke out around 9:00 p.m. Tuesday at Victory Community Church, formerly St. Francis of Assisi, on the 4800 block of Greene Street.

Officials say Victory Community Church is leasing the building from the Archdiocese.

Neighbors tell Action News there have been a lot of break-ins in the building lately.

The fire was place under control around 10:20 p.m.

No injuries have been reported.

How sad for the residents of the neighborhood and those for whom St. Francis Church held so many consoling memories. The treasures we were able to obtain from St. Francis' Church are even more meaningful.

Sale of Historic American Glass from 1883 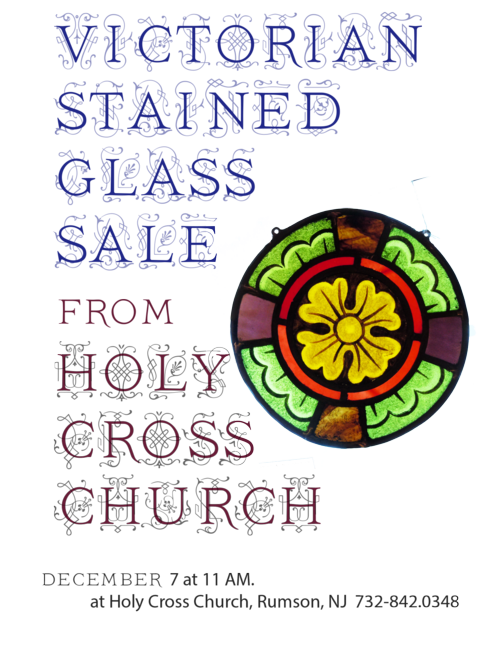 St. Columba, Colmcille, Columkille - many names for the same faith-filled man of God.

His alias, Columkille, is given to distinguish him from among many other Columba's and because he founded so many Irish monastic cells or kille.

He lead a life of austere piety, and after having been named abbot,  he offended the local Irish king by his zealous preaching and travelled to what is now Scotland. There he founded a famous monastery on the island of Iona, which the locals gave him in gratitude for his preaching and pastoral care. This monastery not only educated many church leaders, but produced the incomparable Book of Kells. He was noted for his wisdom, piety and miracle working during his lifetime - including it seems, an encounter with the Loch Ness monster!

After his death, his relics were translated to lie alongside St. Patrick and St. Brigid.

Our beautiful window shows the boat on which he sailed for Iona, the monasteries he founded at his feet and the dove (Columba in Latin) nestled in his arm.

This window will be enjoyed for generations by parishioners visitors to Holy Cross Church through the generosity of the O'Mealia family to whom we express our gratitude.

Amidst all the clamor and the cold, there's always hope. (Winter pansy alongside the stairs to the old church among the construction debris.) 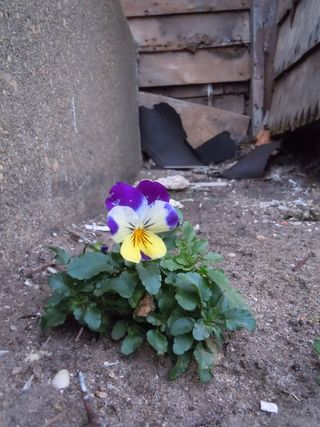 Holy Cross Children's Choir Tunes Up for Advent and Christmas

Thursday afternoons are always tuneful at the Parish Office since the children's choirs practice upstairs in the music room.

"The King of Glory Comes" is one of my favorite Advent hymns. 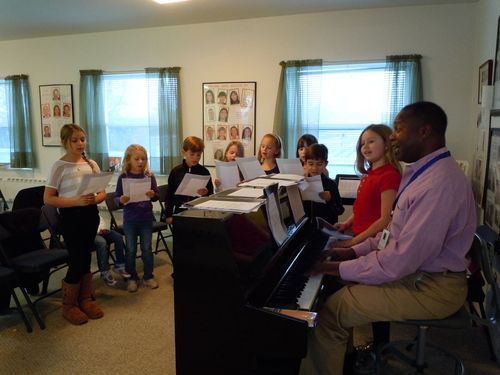 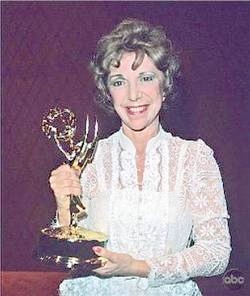 Holy Cross is very thankful to have received a generous bequest from Gloria Monty O'Byrne, a Rumson resident and parishioner of Holy Cross parish.

Her nicknames, "Glow" and "Gloriana" give some idea of her personality and the powerhouse that she was on network television in the glory days of the soaps. I remember being mystified at the time of "Luke and Laura's Wedding" that so many people were not only watching, but arranging their day so they didn't miss it! Luke and Laura were among Gloria's many innovations on General Hospital while she was at its helm.

I remember my mother and grandmother watching "Secret Storm," Gloria's soap opera prior to General Hospital.

She was always generous to charities and local benefits and had a devotion to Our Blessed Mother. She is buried alongside her husband and parents in St. Catherine's Cemetery. "TV's Fair Lady" is inscribed on her headstone.

Her generous bequest to holy Cross will help beautify our new church for generations to come! 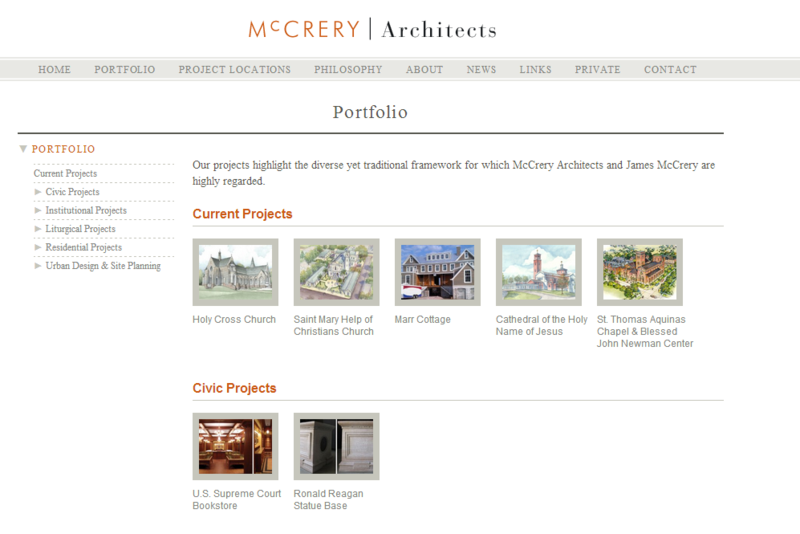 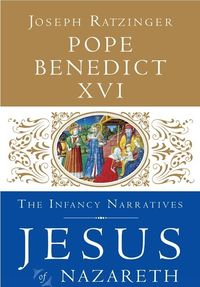 Join us for three Wednesdays in Advent as we read and discuss Pope Benedict XVI's Jesus of Nazareth: The Infancy Narratives. It would be hard to find a better topic or a better person to guide our prayers during the Season of Advent.

If you would like to purchase a book, we will have them at the Parish Office by this coming Friday, Nov. 22nd. The cost of the book is $15.

The meetings are in the St. Michael Media Room in Holy Cross School and begin promptly at 7 PM. Join us for one or all of the three evenings. 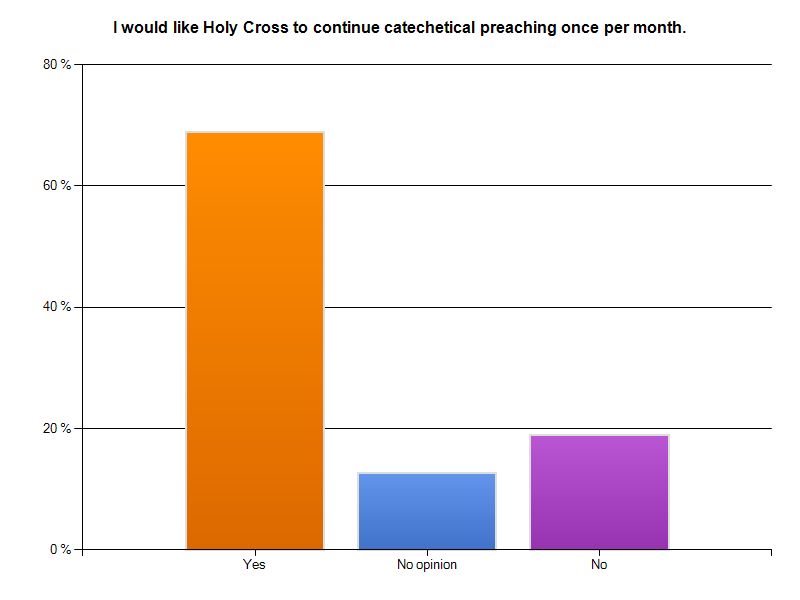 Ready for the Steel to Reach Toward the Sky

Our construction crew have just about finished preparations for the steel girders, which are scheduled to be delivered and erected next week. The concrete block foundation supports are being installed along with the waterproofing of the foundation walls. The foundation is being backfilled as the work progresses. 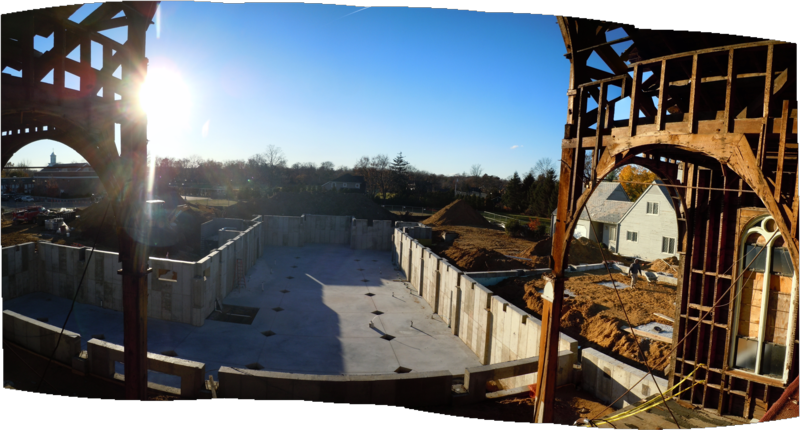 Site Being Prepared for Christmas Manger and Tree

A place alongside the Carriage House has been saved for the Christmas Nativity Scene and you may have already noticed the strings of colored LED lights hanging from the nearby lightpost. Franciso and Susan with some help from our construction workers who fabricated a large, circular anchoring base of rebar have come up with a worthy substitute for our living evergreen trees. Our Christmas tree for the last several years is now gone, and the one remaining evergreen of any size is temporarily off limits.

There also looks to be enough room for our usual collection of Christmas animals to join us for the Stations of the Creche and the Christmas tree lighting - donkey, sheep, goats! 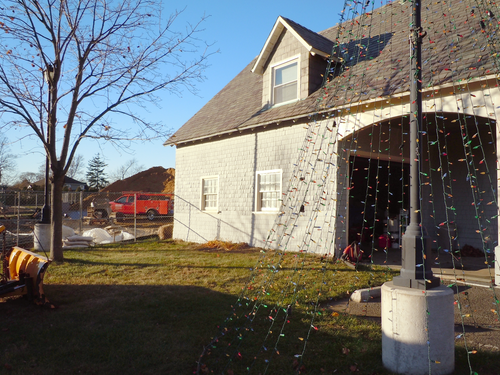 The Thanksgiving Food Drive trailer has been delivered and set up on the north side of the Carriage House. Foodstuffs will be stored in the trailer until delivery to food pantries and families. Frozen turkeys will be shipped directly to their destinations without the need for us to stock a freezer and handle the weight and potential mess of frozen and partially thawed turkeys.

There is a already a good supply of food in the trailer and I know there are stores in the school hallway waiting to be taken to the trailer.

Thanks to our Social Justice Ministry for arranging many of the details about not only the Food Drive, but the Stars for Jesus Christmas gift giving program as well. 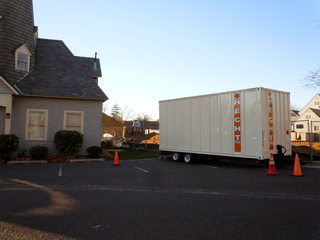 Special Collection for Aid to the Phillippines 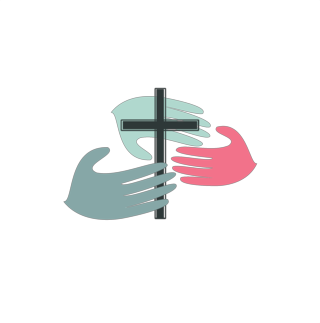 Thank you to all those who generously donated to the Special Collection for the Philippines. The parish has sent a check for     $12,209.95 to the diocese. Of this amount, $2,351.84 was contributed by the school children.

The diocese will send all money collected directly to the Catholic Bishops of the Philippines. 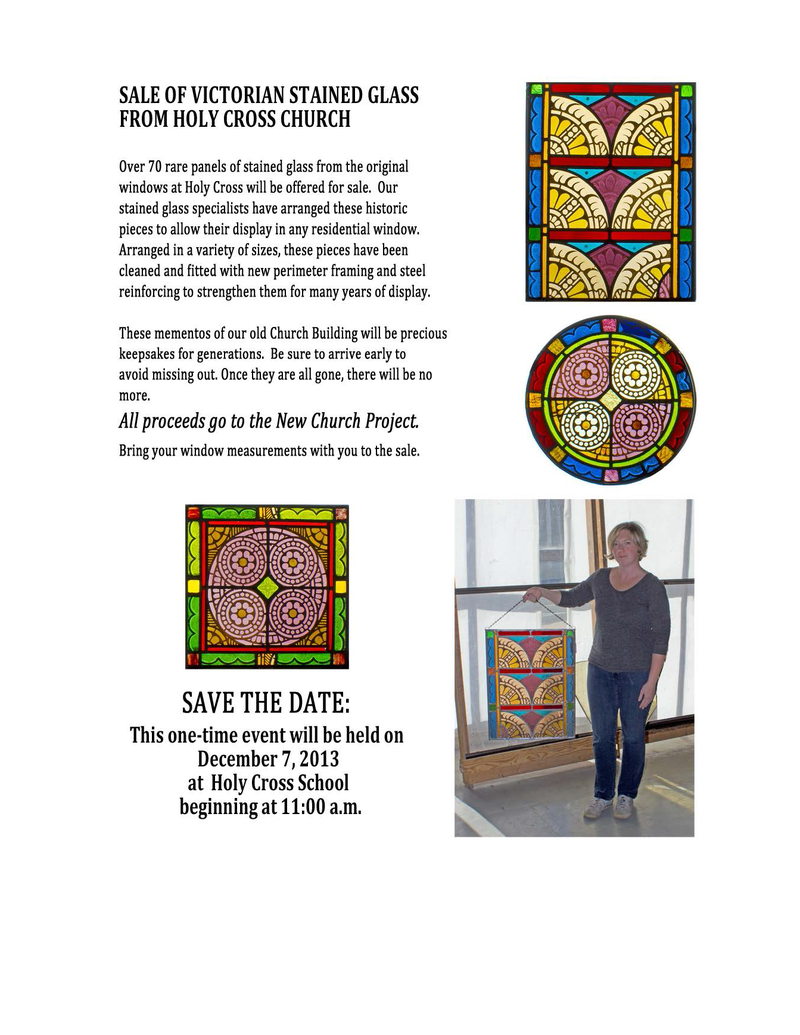 Great Tour of Church for Class 3B 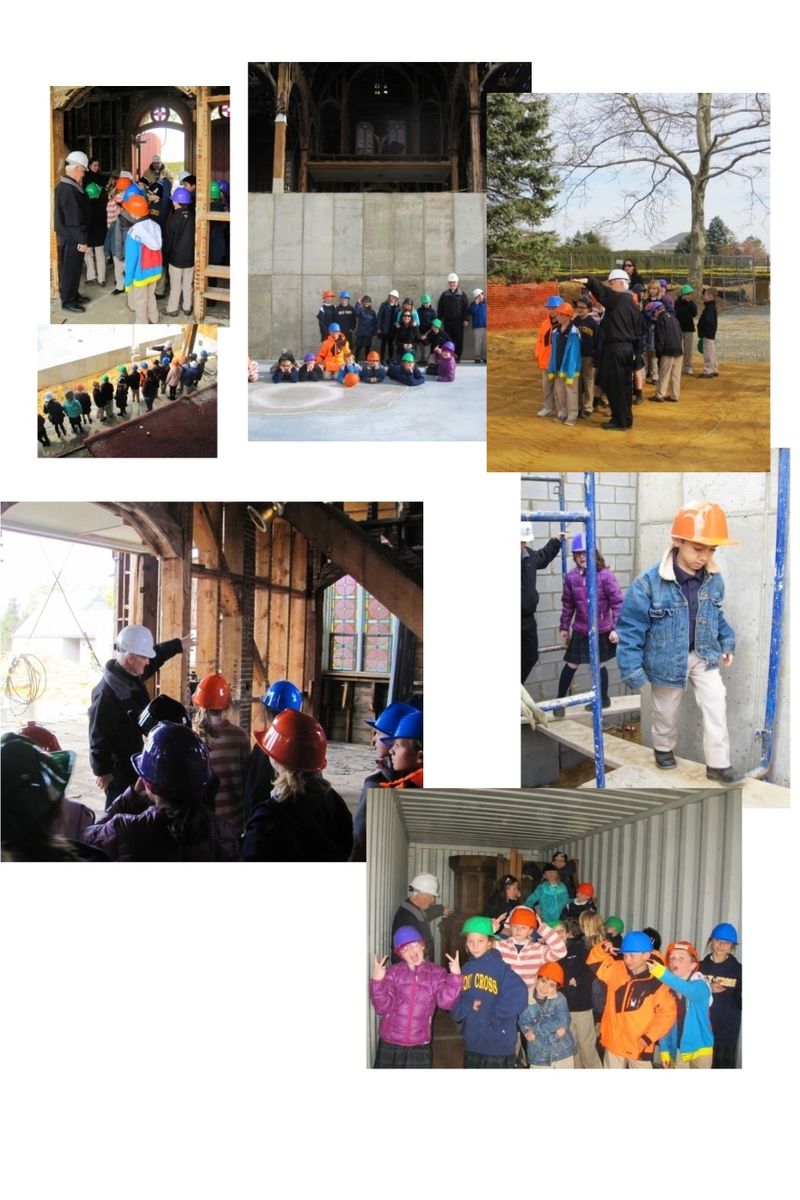 What a great tour we had today for the winners of the Holy Cross Mass Attendance Award last weekend! The weather truly cooperated, the class was on its best behavior. Their teacher Mrs. Kat Eagles and their parents should be truly proud!