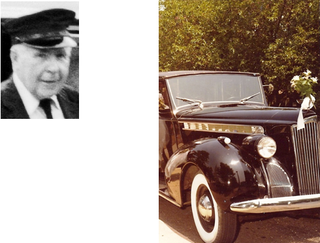 Edward Shea, Jr. was born and raised in Jersey City, New Jersey. He was a graduate of Fordham University and served in the Navy in World War II. After the war, Ed moved with his family to Sea Bright. Together with his father and his brother Walter, he founded and co-owned what came to be known as Shea’s Service Station; it was located just north of the current U.S. Post Office on Ocean Avenue. The Sheas also bought two adjacent houses on the river in the North Beach section of town.

A part of their business was Shea’s Sea Bright Limousine Service. It was this enterprise that truly made Ed and his brother local institutions. Several generations of area residents were driven to New York, the airport, or some special event by Ed or Walter Shea. Their 1939 black Packard was the car of choice for many brides and grooms on their wedding day. Ed’s chauffeuring took a perilous turn and made national news when he was shot in the back during a robbery attempt while waiting in his car outside of Macys in New York.

There was no bus transportation for Holy Cross students for many years, so many alumni have fond memories of riding to school packed into one of the Sheas’ assorted Chevrolets, Cadillac limousines, or, very rarely, the Packard. The hope was always that everybody would be ready, thus avoiding a trip to the Principal’s office for being late. Ed and Walter were very kind, treating their young riders to a piece of candy on Fridays and a gift at Christmas. There were good stories too, like tales of ocean spray as high as the telephone poles and timbers bumping the floorboards of the house as the ocean met the river in one of Sea Bright’s famous storms. Through it all, Ed wore a black suit, with black overcoat if necessary, and a black chauffeur’s hat. Walter was the more casual dresser.

A long time bachelor, Ed married Maureen Duggan late in life and moved to Shadow Lake in Middletown. Maureen died in 2008, and Ed followed her in 2009 at the age of 93 after a long illness. Ed’s attachment to Holy Cross, both directly and through his contact with the lives of so many parishioners and students, was made manifest by a most generous bequest from his and Maureen’s wills. We have gratefully designated their generous gift as the first to our capital campaign for the renovated church. 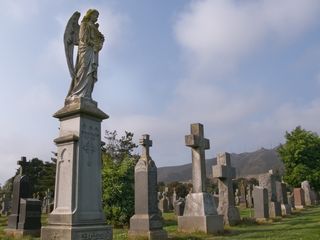 Thank you to those families who came together to pray for their loved ones whom we buried from Holy Cross Church during the past year. Our bereavement committee hosted a reception after the mass which gave everyone a chance to relax, chat and eat some goodies. Families were given small votive candles which were made from last year's Easter Candle - a tangible reminder of Christ's victory over evil, even suffering and death, shared with us in our baptism and nourished with the Eucharist.

A Bit Frayed Around the Edges But Solid As A Rock 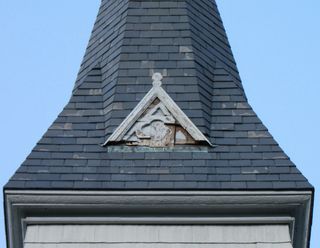 In last week's surprisingly vicious snowstorm, Rumson was spared any significant snow accumulations, but the violent winds tossed branches and lawn ornaments everywhere. Wooden trim from the front of Holy Cross' steeple was discovered on the ground the morning after the storm; it came from the ornamental triangular structure (which I'm sure has a name; I will look for it!) on the front of the steeple.

Though some of the trim has gone missing in the many storms the church has weathered during its history, the beams, rafters and foundation are built of solid, massive timbers which will serve us well during the upcoming expansion project.

No storm can shake her inmost calm...