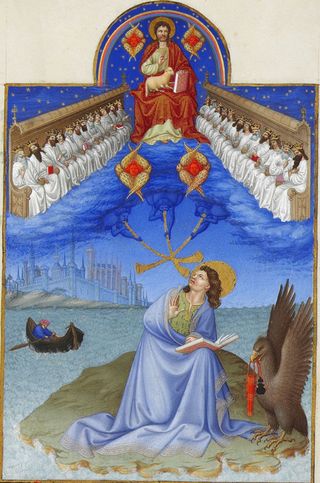 OK, are you ready? Let's tackle the Book of Revelation. Often thought of as an extremely difficult and mostly irrelevant book of the bible, a basic understanding of its message and its theology is good for the present age and not too difficult to begin.

The study guide we will use for the sessions will be Coming Soon: Unlocking the Book of Revelation and Applying Its Lessons Today by Michael Barber, published by Emmaus Road press in 2005. The author uses a more "folksy" tone than some of the other authors we have read, which might help compensate for any difficulties with the Scriptural text itself.

Let's plan to begin on Wednesday, May 11th in the St. Michael's Media Room at 7:30 PM and plan for a session of approx. 4-6 weeks depending on interest and how quickly we cover the material.

Posted at 11:20 AM in Faith Seeking Understanding | Permalink | Comments (0)

Home or away, most celebrated the Resurrection of the Lord at mass. Alleluia. 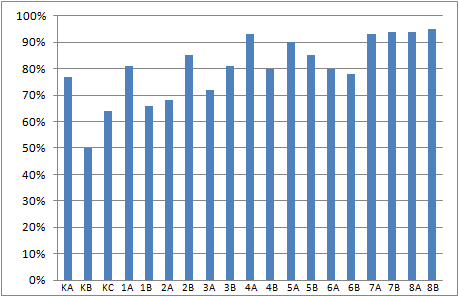 It's such a joy to see our 7th and 8th graders leading the way in mass attendance!

Christ Our Light - Lighting of the Easter Candle at Holy Cross 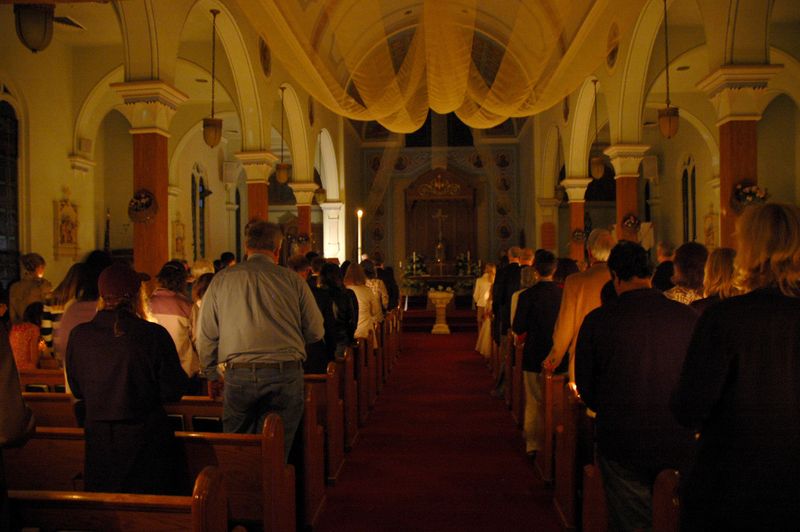 The results of the Holy Thursday foot washing poll are interesting. In retrospect, I wish I had included questions about whether or not respondents have had their feet washed, or whether they attend the Mass of the Lord's Supper on Holy Thursday. There is always a balance between making the surveys quick to take and informative at the same time.

Somewhat suprisingly, the foot washing is not looked upon with universal appeal, despite the fact that it has been restored to the liturgy in one form or other since the 1950's. Those who are charged with recruiting volunteers to have their feet washed may have expected as much, since it seems a difficult privilege for people to accept in some parishes.

A majority were neutral or opposed to the foot washing. Anyone who answered that the washing sould be eliminated would also refuse to be washed, while those who advocate it should be retained answered they would agree to be washed.

I doubt we would ever eliminate it since there is a tradition at Holy Cross, at least in recent years to include this option. However, exhaustive efforts to recruit twelve persons might be missplaced.

Liturgical experts generally agree that substituting other "washings" is wrong-spirited and a majority of our respondents agree. While it's true that we generally wash our hands before meals, and foot washing isn't part of our contemporary practice, neither is hand washing generally performed for us by a servant, so the substitution falls a bit flat. (Let's not even think of Purell!)

The liturgy committee won't take up the matter for another year, so there is plenty of time for prayerful reflection on the matter. 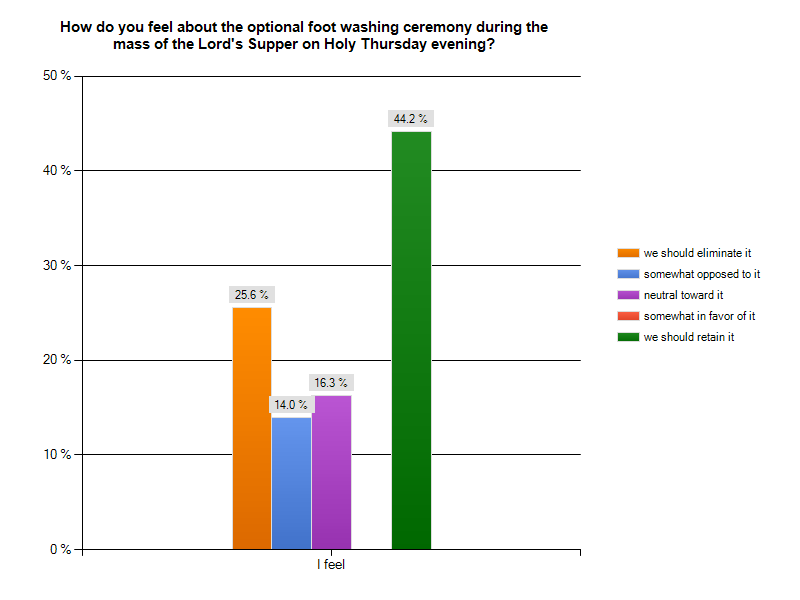 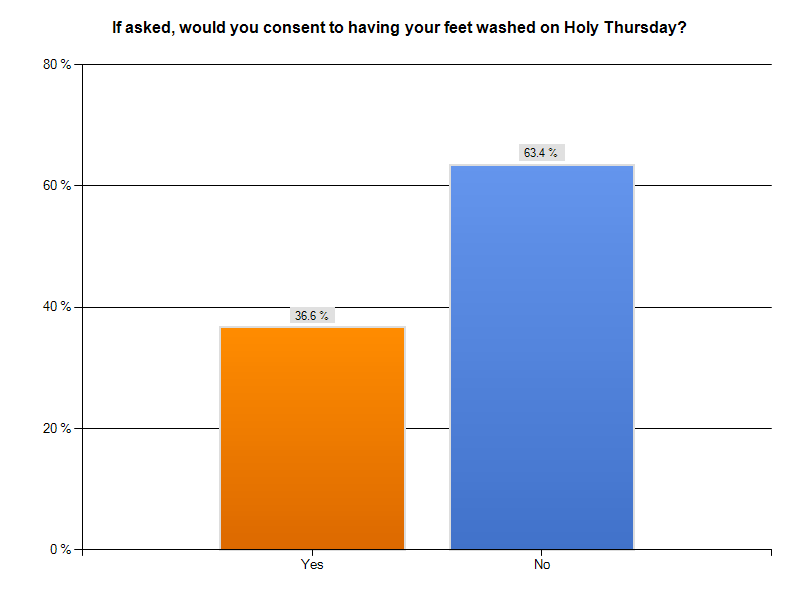 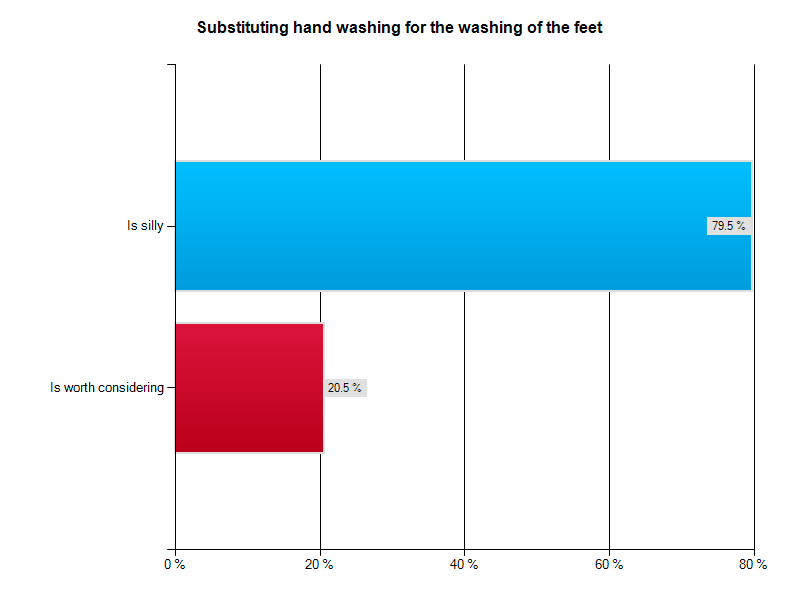 Allelulia! Christ has conquered the darkness of sin and death! 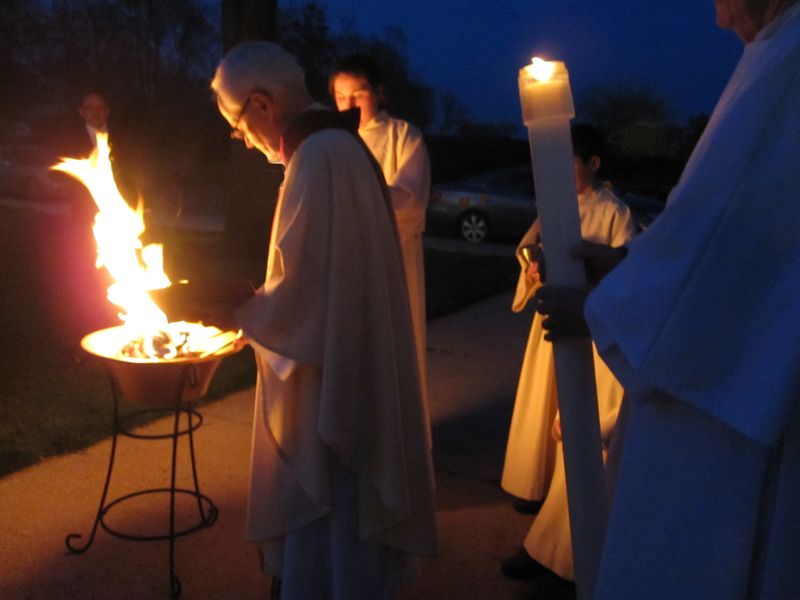 Last evening's diocesan celebration of the Chrism mass at St. Mary's Cathedral in Trenton with Bishop O'Connell was a spirit-filled beginning to the grace-filled period of Holy Week. Many priests of the diocese gathered along with the bishop to bless the sacred oils that will be used in sacramental anointings at all the parishes in the diocese during the coming year. Our own RCIA team was selected to bear the Oil of the Catechumens to the sanctuary for blessing. It is tradition for the priests to renew their promises of priestly commitment at the Chrism mass each year. The presence of so many faithful from parishes all over the dioceses made the occasional even more poignant.

Bishop O'Connell preached to the largest number of priests in recent years and exhorted them to be bearers of the Truth to a world which sometimes doesn't want to hear it. While noting the tragedy of those priests who have wounded the church, he celebrated the goodness of the priesthood and of faithful priests, emphasizing their sacramental roles in persona Christi throughout the diocese. 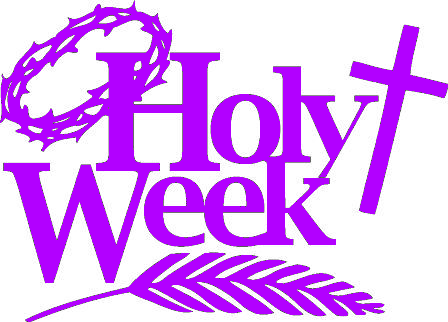 This Wednesday, there will be mass at 9 AM as usual, followed by Exposition of the Blessed Sacrament all day until Evening prayer and Benediction at 5 PM.  Traditional Latin Mass will be prayed at noon as usual. Confessions will be heard in the church from 6 PM to 7 PM.

There will be no Faith Seeking Understanding meeting this Wednesday, but sessions will resume sometime after Easter with a bible study on the Book of Revelation. More details to follow.

Tonight Bishop O'Connell and all the priests of the Diocese of Trenton will bless the sacred oils used in the sacraments of the Anointing of the Sick, Confirmation, Ordination to the Priesthood and Baptism.

Our own RCIA team will have the privilege of bringing up the Oil of the Catechumens to be blessed at the mass.

The Chrism mass is an opportunity for the bishop to address the priests of the diocese and along with them to renew the promises made at priestly ordination.

Please pray for our bishop and our priests. 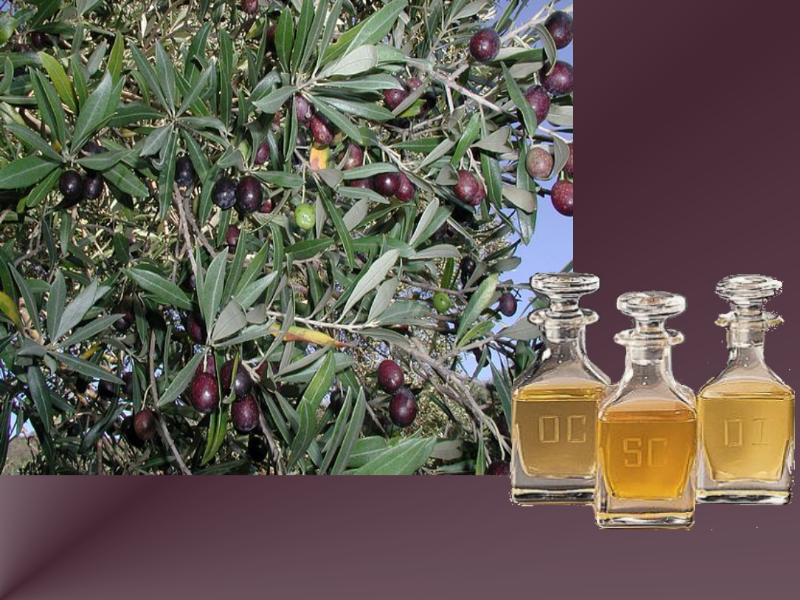 Well, the rain did hold off! Just as we reached the church's parking lot, the sun broke through the clouds and we enjoyed a beautiful, sunny Palm Sunday. The sky in these photos even tell the story!

Thanks to all who braved the initial cold and helped us mark the solemn beginning of Holy Week. 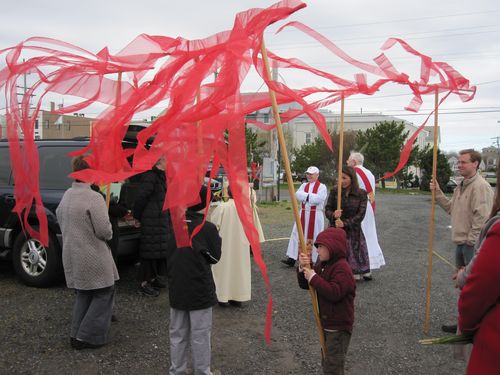 The earliest arrivals at the public parking lot in Seabright 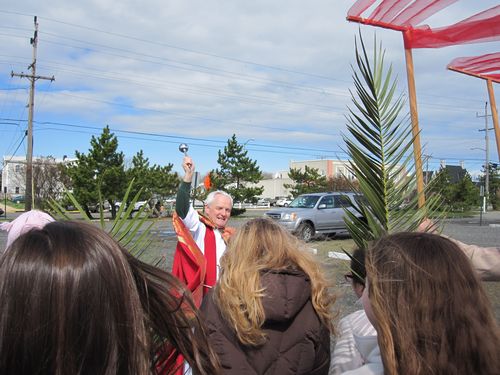 The holy water was blowing everywhere! 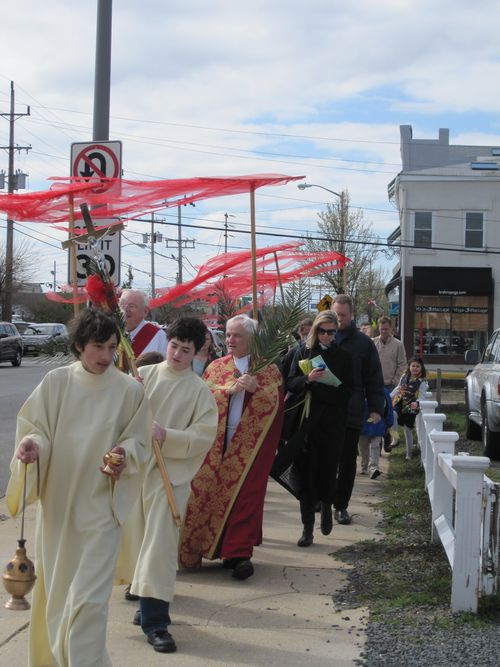 The procession speed never reached 30 mph, but the winds might have!

Our intrepid group leaves Seabright for the walk across the bridge. 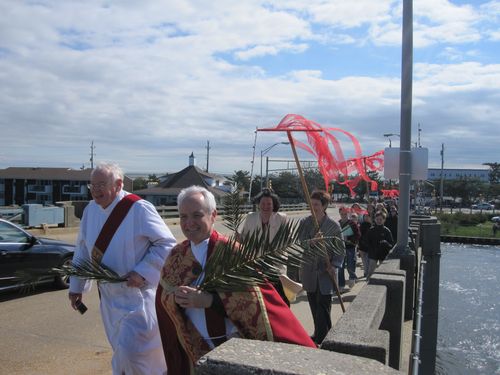 It's always exciting to cross the bridge into Rumson on foot. 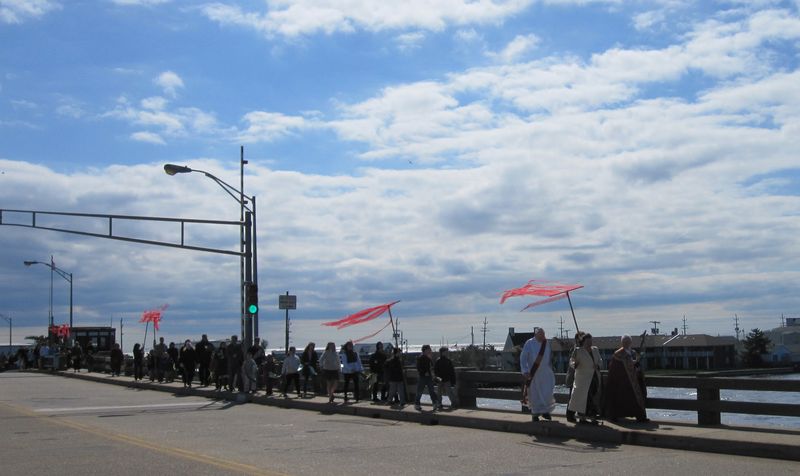 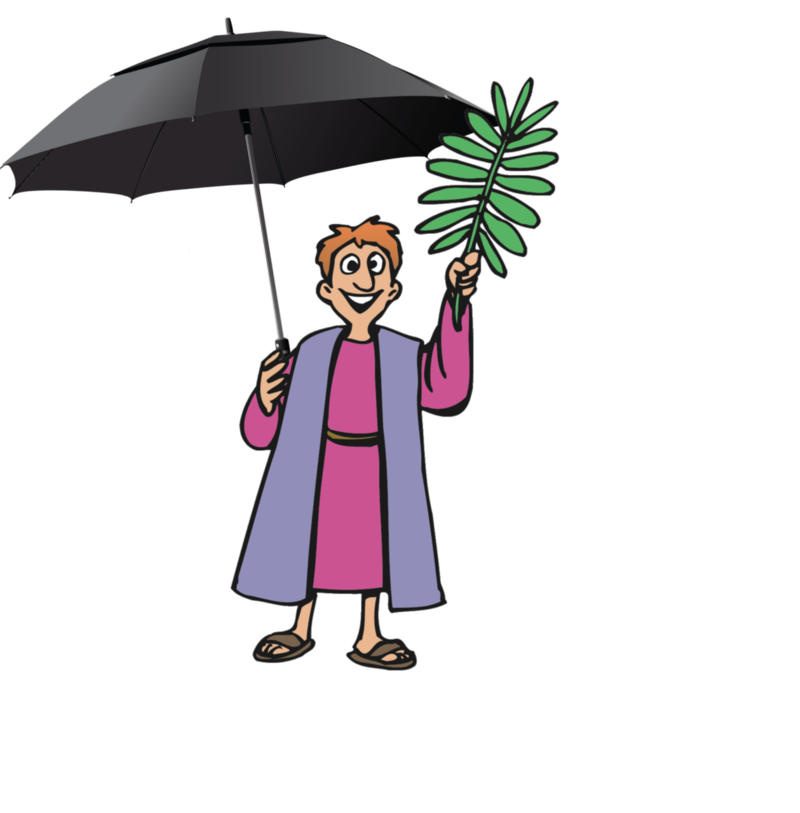 It's supposed to clear up, or at least stop raining by the time of tomorrow's Mass, so if it's not actually raining, we'll see you at Seabright in the public parking lot at 10 AM on Palm Sunday! 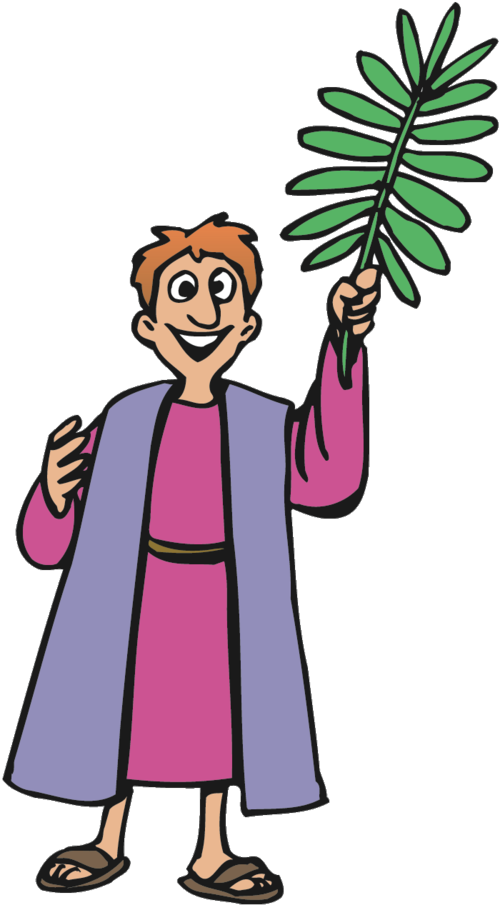 Parishioners will gather at the public parking lots in Seabright beginning at 10 AM on Sunday to process at 10:15 across the bridge to Rumson for the 10:30 AM mass.

Join us to usher in Holy Week

and share in the festivity of our annual Palm Sunday Procession.

Join us in the last session of our Faith Seeking Understanding session for Lent. Tonight we will discuss the final chapter in Benedict Groeschel's book, "The Last Things." Happily, this chapter deals with Heaven, something we all hope for. 7:30 PM. You don't need the book, but it helps. 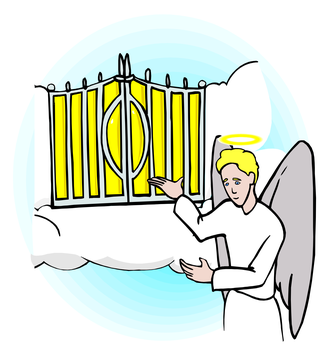 How fortunate we were to meet and hear Dr. Fred Luskin from the Stanford Forgiveness Project at Holy Cross parish. Dr. Luskin spoke to an enthusiastic group of parishioners and non-parishioners alike for 90 minutes, motivating us not only to try forgiveness but giving us several specific techniques by which to accomplish it. Thank you to everyone who was so welcoming to Dr. Luskin and a great friend of his, Brother Henry, a Christian Brother originally from Louisiana. 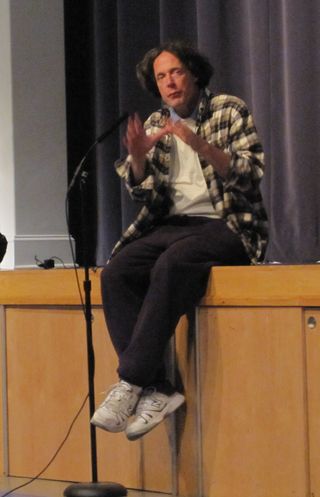 Dr. Fred Luskin emphasizes a point during his talk on forgiveness.

Several of Holy Cross School's student ambassadors took the bishop on a tour of the school. The bishop spotted one student's project on the Jefferson Memorial and shared some memories of his own student days in Washington DC with his hosts. 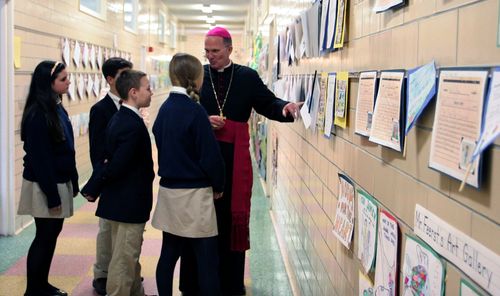 The bishop, the pastor, the architect before mass 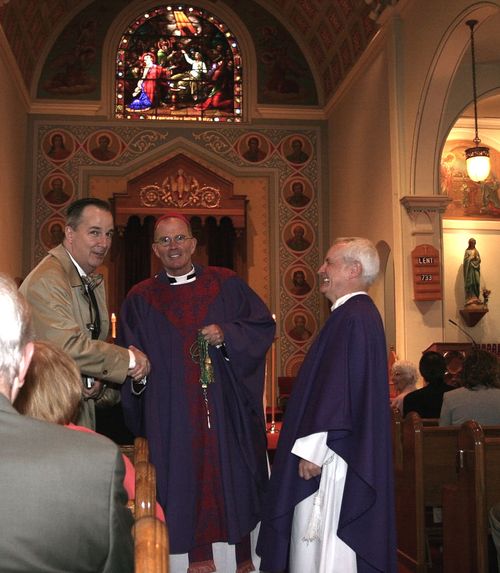 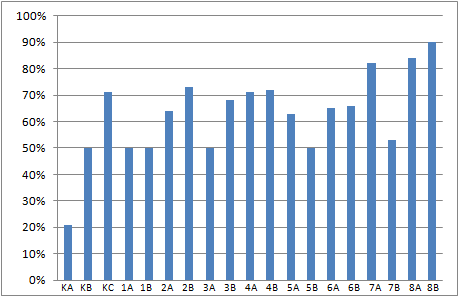 Wow, 7A and both 8th grades great job and wonderful example for the other grades!

A Day of Grace and Joy 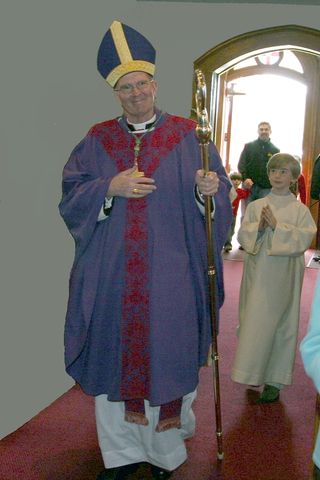 Thank you to everyone who welcomed Bishop O'Connell to Holy Cross parish yesterday and helped make his reception so warm and relaxing. Our liturgy was prayerful and beautiful and the reception in the gymatorium was just perfect. Several of our Holy Cross student ambassadors escorted Bishop O'Connell on a tour of the school. Our VIP list included the Bishop, his secretary Fr. McClane, the Lieutenant Governor of New Jersey, the mayor of Seabright, the mayor of Rumson and our architect, James McCrery who drove from Washington, D.C. to be with us for the afternoon.

Our internationally renowed presenter for the Evening of Reflection, Dr. Fred Luskin, led an insightful and practical presentation on how to be become a forgiving person along with specific and practical tips on how to begin the process.

A wonderful day of grace for Holy Cross parish which will bear fruit for years to come. 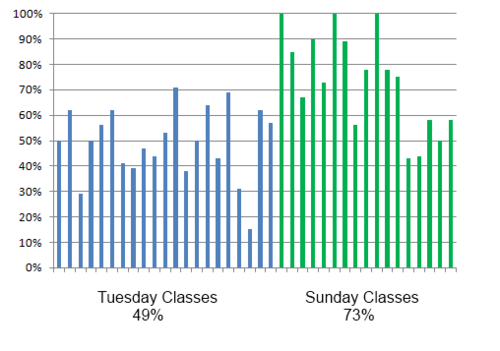 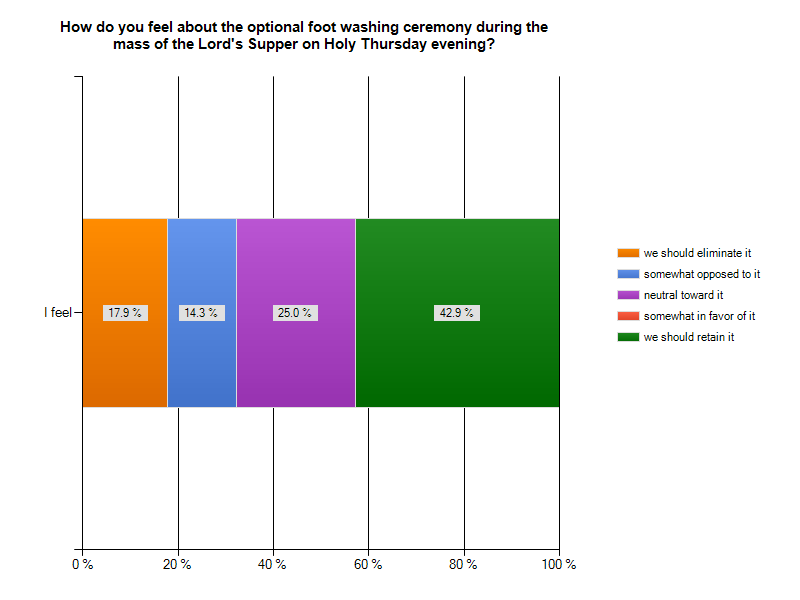 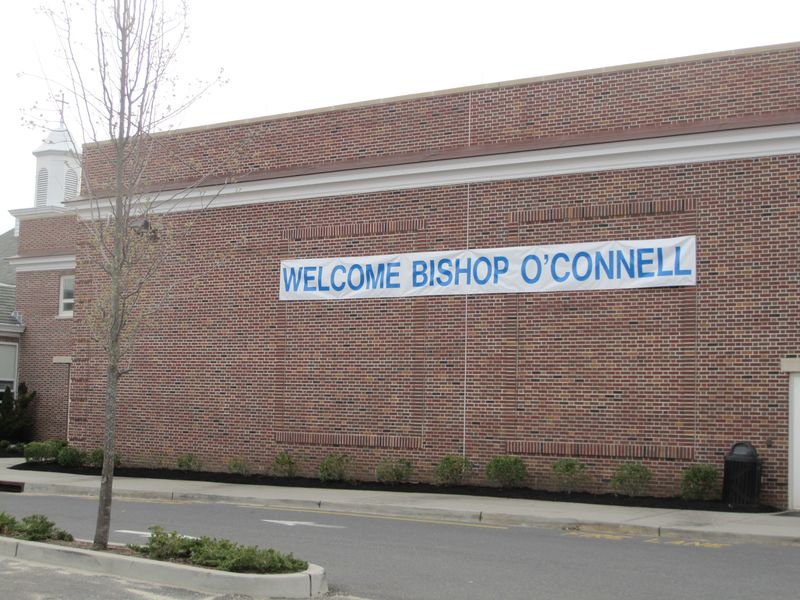 Workers affixed a new banner to the gymatorium this afternoon to welcome Bishop O'Connell on Sunday. Please join us on Sunday at the 12 noon mass and reception to follow.

One More Week to Heaven 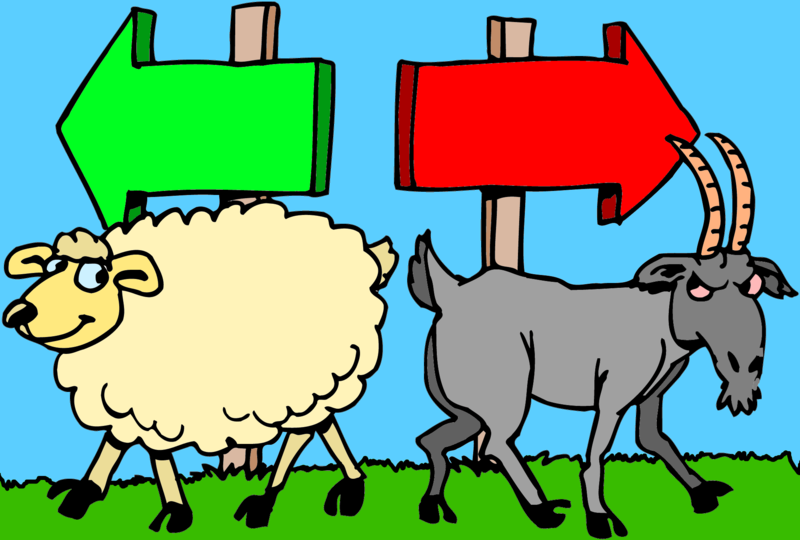 Join us for our Faith Seeking Understanding discussion this evening on Chapter 5 of Benedict Groeschel's book After This Life. This chapter deals with the final judgment and the resurrection of the body. We meet at 7:30 PM in the St. Michael's Media Room in the school. Next week's topic...Heaven.

Remember that beginning tomorrow night and continuing for the remainder of the Wednesdays in Lent, confessions will be heard in the church between 6 -7 PM. The Sacrament is also available at Holy Cross after Saturday AM mass, after Stations of the Cross on Friday evenings and 20 minutes before weekend masses.