More and more families are preparing Worship Aids to distribute at Masses of Christian burial at Church. We neither endorse nor discourage this practice, but should emphasize that it is not required and not expected by the church. It seems to me an addtional responsibility on the family at a time they are least able to cope with one.

Nevertheless, in an effort to assist those families who wish to distribute a Worship aid, and to ensure that the context and content of materials distributed in the church are appropriate, the parish staff have been developing a template for use at funerals. Download Funeral Worship aid template 2010

I'm surely not one to rush Advent, but it's not too early to think about masses on Christmas day. A communication from the US Bishops reminds us of several quirks of the Christmas calendar this year.

This year Christmas falls on a Saturday. The vigil masses for Christmas will be celebrated on Friday evening as usual. We will be experimenting with one additional earlier mass this year in an effort to alleviate the traffic congestion and parking problems. Since our parking has been more limited in recent years, we will not be scheduling masses in the church and the gym at the same time. Please watch for the schedule in the bulletin and in the special Christmas mailing and help us by strategically planning the mass you will attend.

The Feast of the Holy Family of Jesus, Mary and Joseph: Sunday

Sunday, as usual, remains a holy day of obligation and our Sunday mass schedule is unchanged.

The Solemnity of All Saints is celebrated on Monday and IS NOT a holyday of obligation this year. 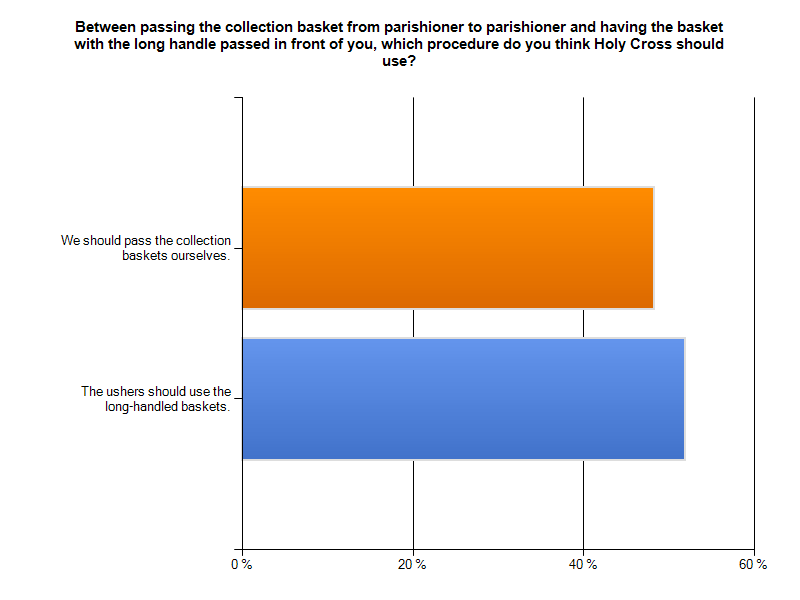 Great news! Bishop David O'Connell has accepted our invitation to be the commencement speaker on June 10th. As many of you know, Bishop O'Connell was immediate past president of Catholic University of America; his visit to our school not only emphasizes the importance he places on Catholic education, but is a great honor for our students, staff, faculty and parents. 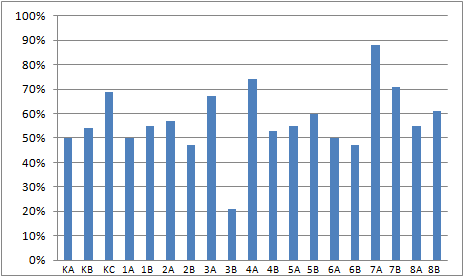 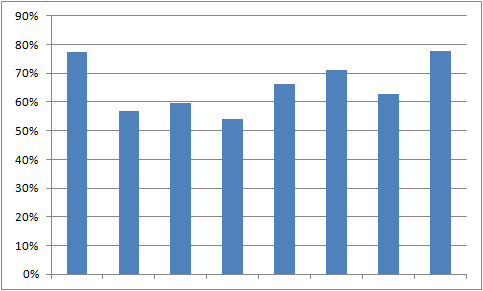 Most classes are doing well; four of the Sunday religious education classes had 100% attendance last week. 7th grade continues to lead our school with consistently superior mass attendance. Let's try and do even better...Jesus deserves our best! 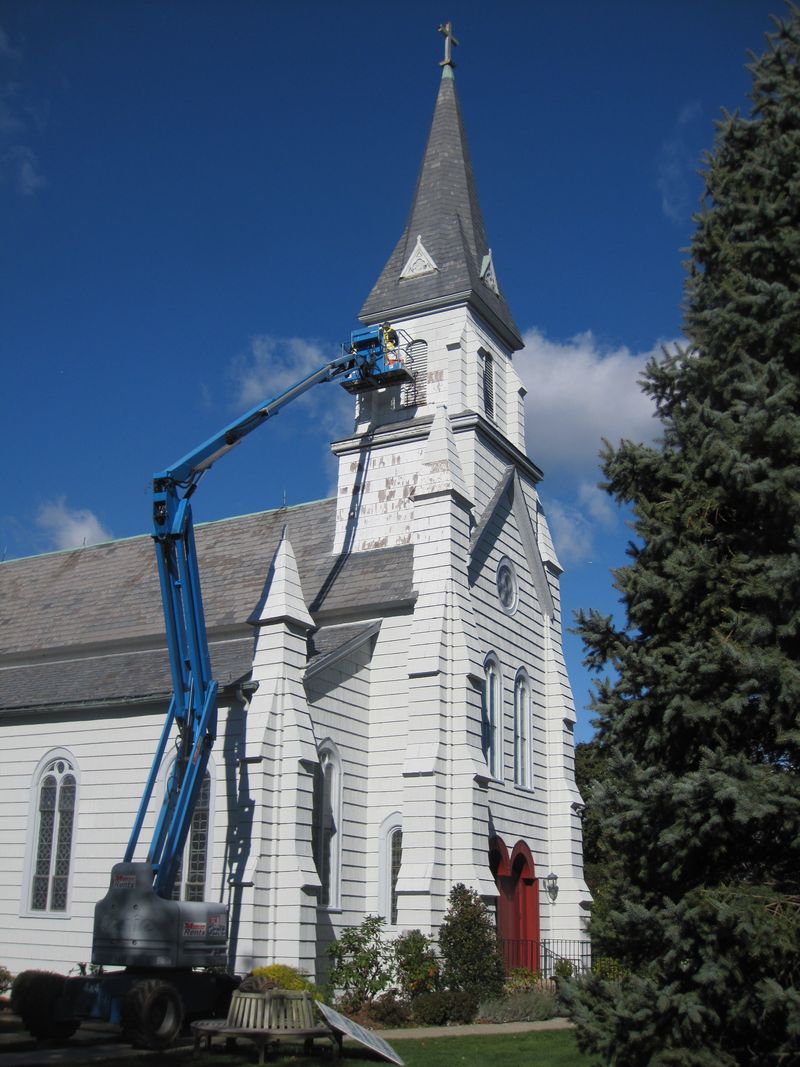 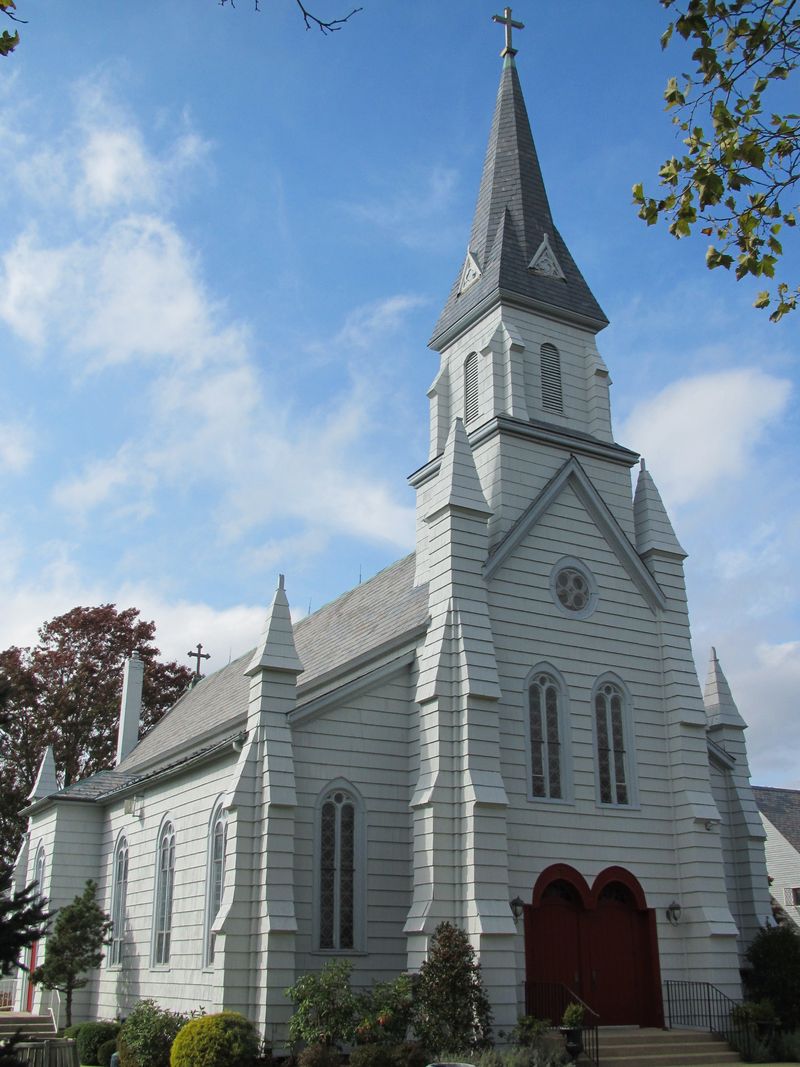 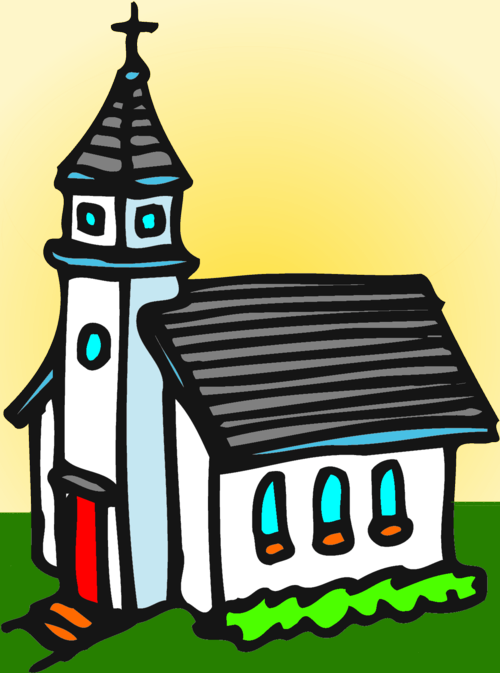 Over the past year or so, we have been experimenting with different collection procedures at Holy Cross to emphasize its importance as one of the components of our active participation at Mass.

Many parishes have abanonded the use of the baskets with long handles passed only by the ushers. They are quick and orderly, but somewhat impersonal, easily ignored and unable to reach the center of the rows of seats in the gymatorium. Passing the baskets can be confusing until everyone knows what to do and may take a bit longer.

All things considered, what procedure do you think we should follow?

Coajudtor Bishop O'Connell Meets with the Priests of Our Deanery

Recently Bishop O'Connell joined our deanery meeting to meet the pastors of this area individually and to articulate some of his early goals which involve the cooperation of priests and laity alike.

The bishop was affable and eager to listen to his pastors and emphasized at least two important themes of his early ministry in our Diocese. One priority will be Catholic education, not only in our schools, but through a renewed emphasis on catechesis of both faithful Catholics and those who have wandered away or left the active practice of the Catholic faith. Again and again we have already heard Bishop O'Connell lament that the young people don't know Jesus Christ. Our baptismal call to discipleship obliges us to change that; we are to make Jesus Christ known to those who come to church and those who don't. This is part of the new evangelization of which Pope Benedict speaks.

Another of the bishop's priorities will be making Jesus known through the weekly celebration of the parish Eucharist. Weekly worship with our fellow Catholics to praise God and be nourished by Jesus' Body and Blood must be seen as crucial for our faith, not an option whenever we're not too busy or our schedules permit.

Preaching, evangelizing and practicing the faith - some of the hallmarks of the church from its very beginning. Welcome to Trenton, Bishop O'Connell. 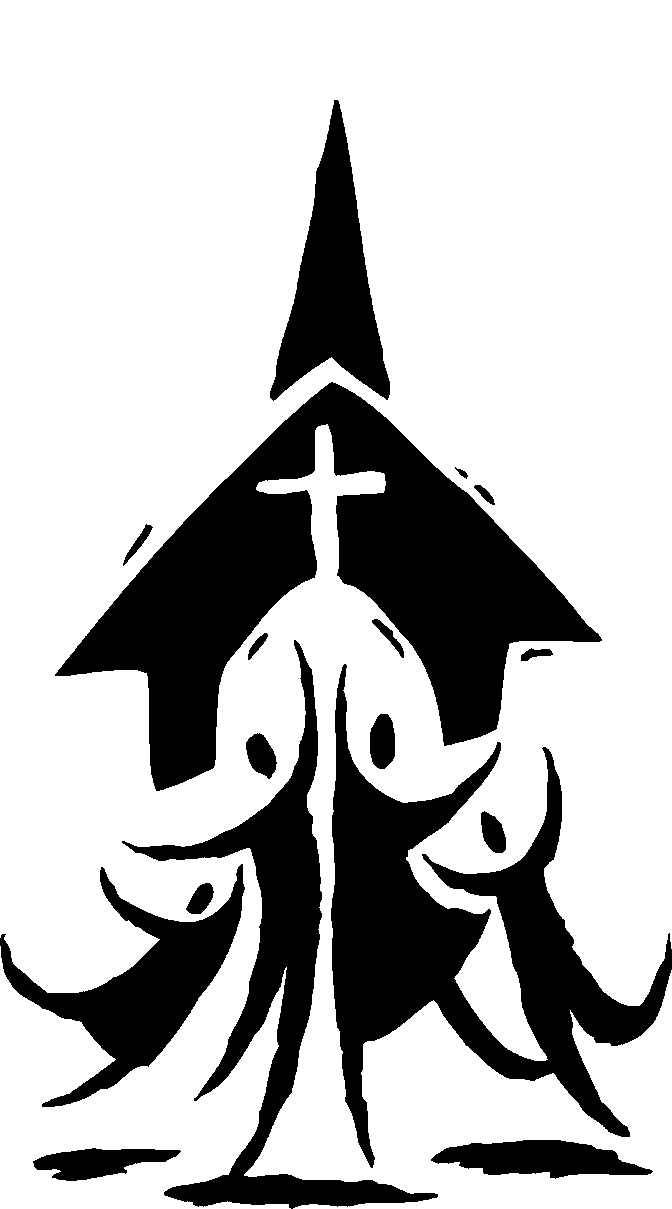 Along with all other parishes in the diocese, Holy Cross is appealing to parishioners to assess their level of weekly giving to the church and to increase it if possible.

Every registered parishioner and family should have received a letter from Fr. Manning asking for a commitment to weekly giving and its increase, even in these challenging economic times. No one is being asked to give money they don’t have, but everyone is being asked to assess their spending pattern

If you have not received a letter, it means you are not on our parish mailing list. Stop by the parish office to pick up a registration form, or take a packet from the back of the church (which as you may know, is open 24 hours daily, 7 days per week.)

Thank you for your past support and future generosity as we plan the future of Holy Cross parish! 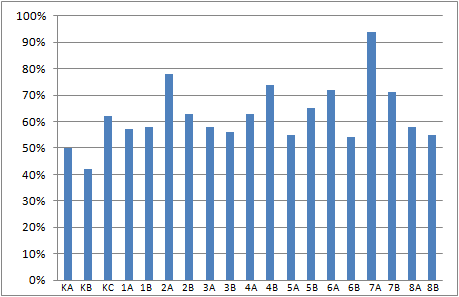 Congratulations once again to 7A !!

The Lottery and the Archbishop

Spoiler alert: If you haven't read Shirley Johnson's short story The Lottery, you might want to do so before reading what Archbishop Chaput has to say about its modern interpretation.

It's both fascinating and alarming that Johnson's story fails to predictably raise much contemporary moral indignation. Whereas in previous decades, the creepy juxtaposition of an ancient rite of human sacrifice with Americana New England in the 1940's brought swift condemnation of the practice, its almost too hard to believe that in university settings these days the story meets with a yawn and a "who are we to condemn the villagers of this story?"

Archbishop Chaput of Denver, insists that this change has not come about because the younger generation is cowardly, but because they have lost their moral vocabulary. "Our culture is doing catechesis every day. It works like water dripping on a stone, eroding people’s moral and religious sensibilities, and leaving a hole where their convictions used to be.”

And then this gem:

“Instead of changing the culture around us, we Christians have allowed ourselves to be changed by the culture. We’ve compromised too cheaply. We’ve hungered after assimilating and fitting in. And in the process, we’ve been bleached out and absorbed by the culture we were sent to make holy.”

“We need to confess that, and we need to fix it,” he asserted. “For too many of us, Christianity is not a filial relationship with the living God, but a habit and an inheritance. We’ve become tepid in our beliefs and naive about the world. We’ve lost our evangelical zeal. And we’ve failed in passing on our faith to the next generation."

We've been determined to change that at Holy Cross, emhasizing weekly mass attendance and developing strong catechetical programs not only in our school, but in our Religious Education Program. Each year more and more of our teachers become trained, not only to manage their classroom effectively, but updated on the central truths of our faith. 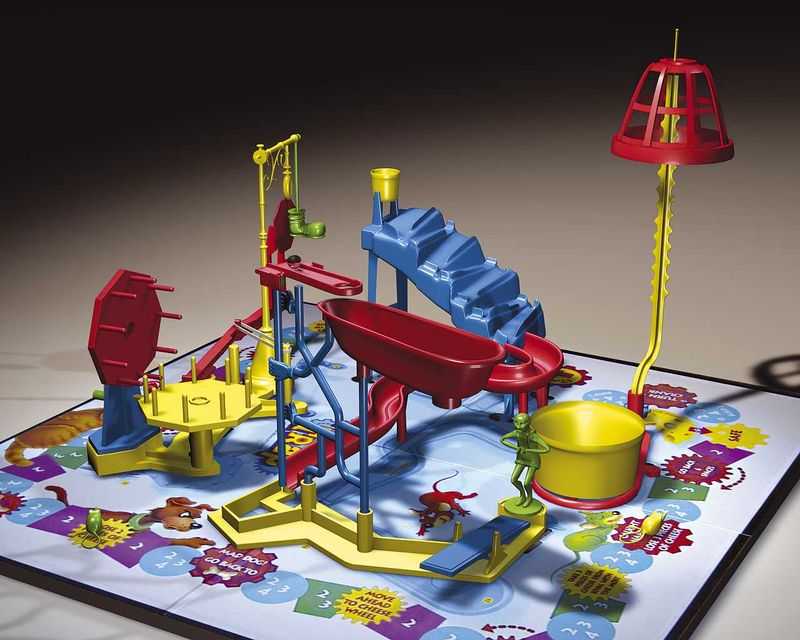 Well, the email has been working for a day or so along with the Internet and the fire alarms are happy and silent so far.

Looks to be that the rapid succession of brown outs the parish experienced triggered a series of unfortunate events despite battery back up on our servers, phones and critical electronic equipment. The fire alarm just before mass was called in by our alarm system and we are inspecting the sensors to detect any that might need replacement or additional cleaning.

Does anyone remember the game "Mousetrap?"  The series of electronic gadgets, filters, servers, phones and firewalls can also participate in a cascading series of events!

Internet Service Down in School and Parish Center

After a quirky quadruple on-and-off-again electrical outage last week, the internet connection to the parish has been down. ADT, Verizon and our own IT expert are still trying to pinpoint the problem. Hopefully the connection will be up and running by start of the business day on Tuesday. 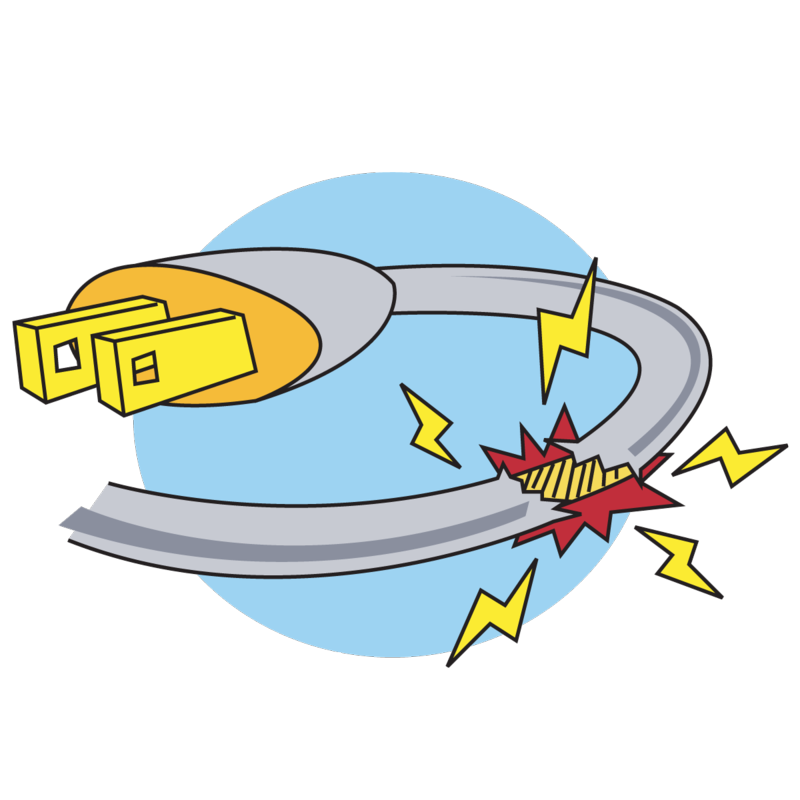 The fire alarm which went off just before the 10:30 AM mass was apparently a glitch in the alarm system, possibly triggered by short power failure in the phone system. Nothing hot in any case. Thanks to everyone for your patience and attending mass in the church instead. 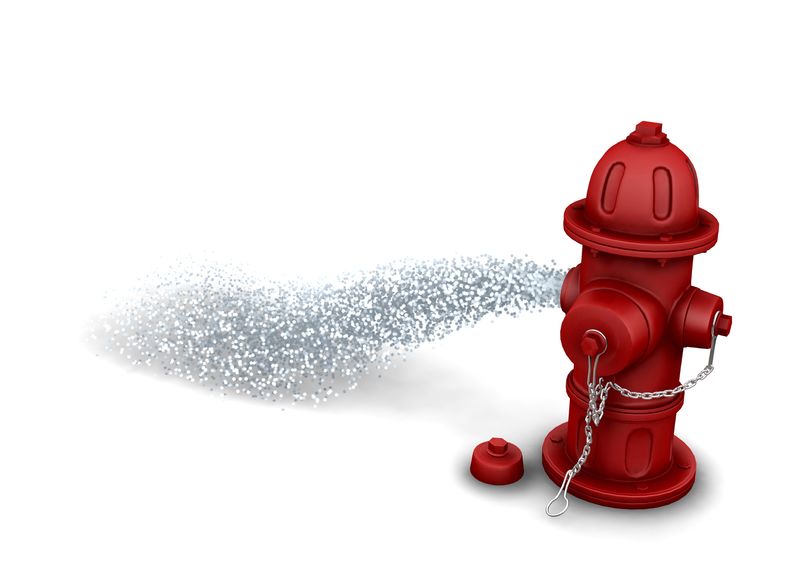 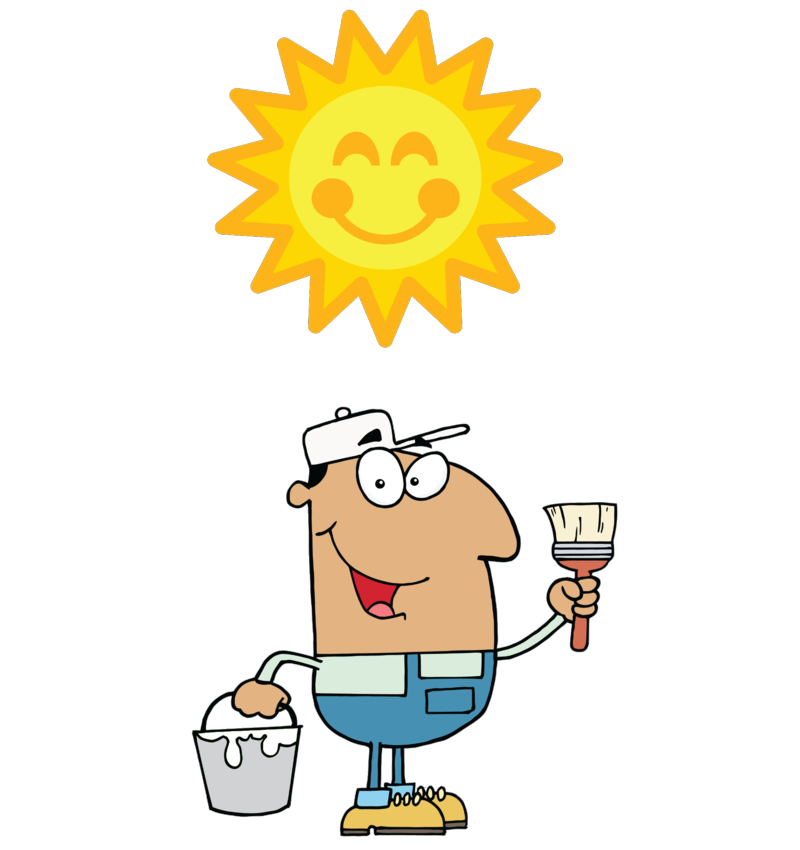 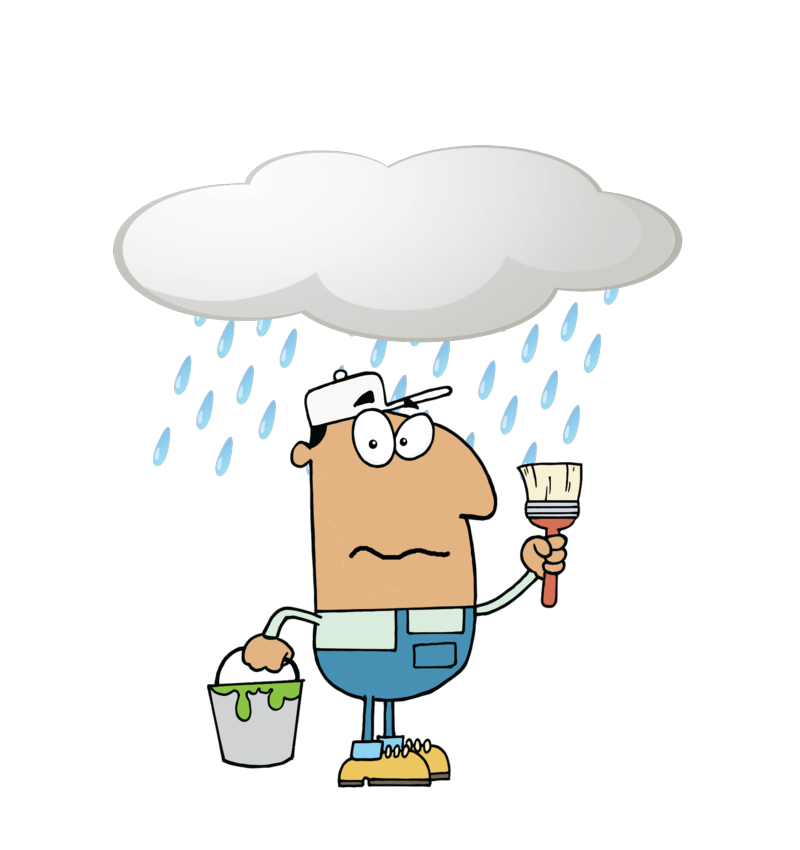 Feast of St. Francis of Assisi - Blessing of the Animals

Poor St. Francis. Some have tried to tame his radical embrace of poverty and Jesus' gospel to anoint him the contemporary patron of the Department of Environmental Protection.

St. Francis loved God, first and above all, and all creation as God's handiwork. He realized that we arrive in this world with empty hands and leave it the same way - a spiritual insight which promotes proper detachment from earthly possessions. Caring for a pet responsibly helps us understand how we are stewards of God's creation, not owners. Our pet's total reliance on us can teach us loving responsibility. The loss of a beloved family pet is often the child's first experience with the inevitability of death. As we grow older, we can expand our circle of loving concern outside our immediate family to embrace others, taking with us all the compassion our family and our pets have taught us.

As we gather to ask God's blessings on our pets, let us ask for the wisdom to be good stewards of God's creation. 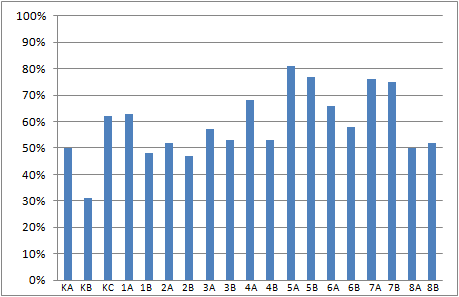