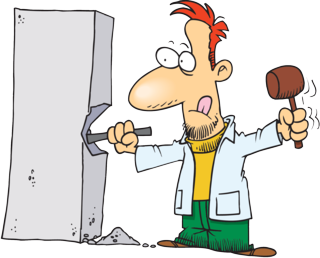 The designer of our Lift High the Cross Memorial wall informs us that they will visit some time this week to remove panels for engraving the names of our generous and faithful donors.

We are so proud of our generous families and can't wait to see their names on our memorial.

For those who are still faithfully fulfilling their pledges, we need your help. All names will be honored when pledges are completed. Thank you.

We have a few of these around the campus. This one is next to the white Rugosa bush and is already topping the new fence. 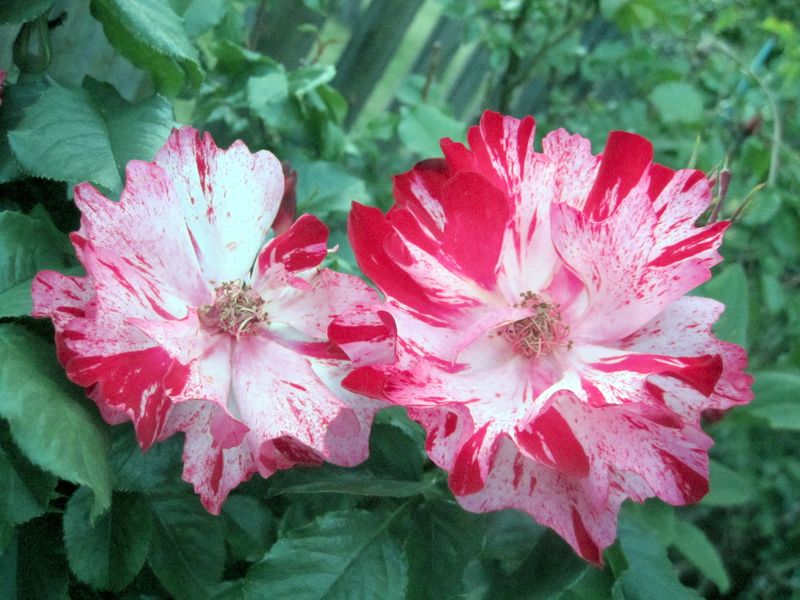 Rosa Rugosa Happy After a Move

This fragrant and vigorous rose was not quite happy in its first home. It kept reaching for the sun and was a bit spindly. This is about two years after the move to full sun and its thriving. Its in the far corner of the parish field near the tennis club. 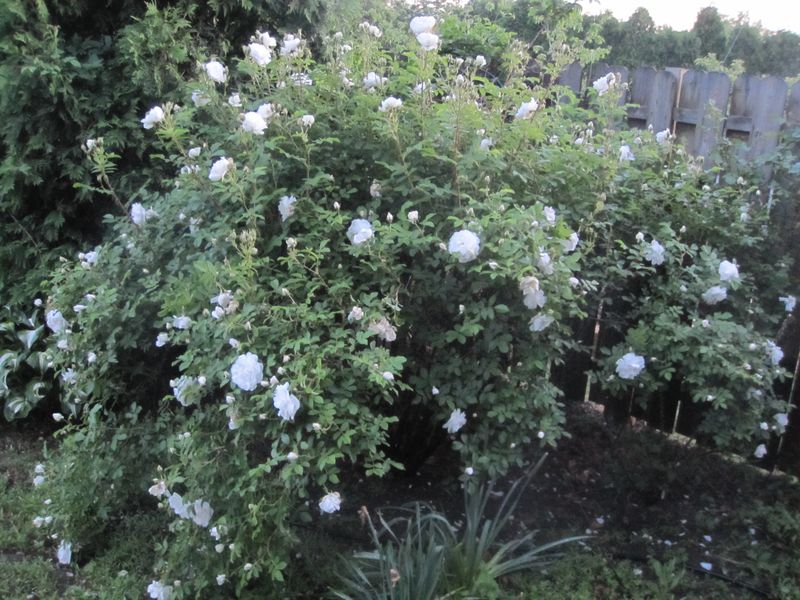 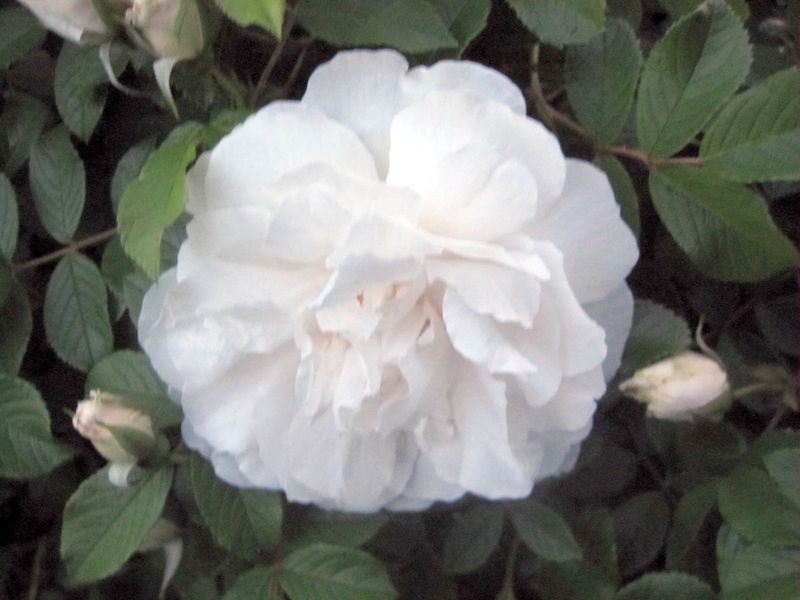 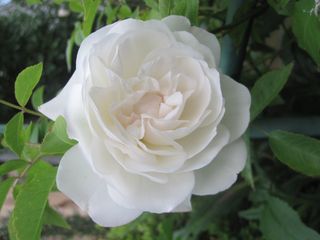 It's taken a few years for the Iceberg roses to get off to a decent start, and several young plants must have been a delicious treat for the deer and the bunnies, but finally a mature rose from one of the plants which are slowly climbing their way to heaven. 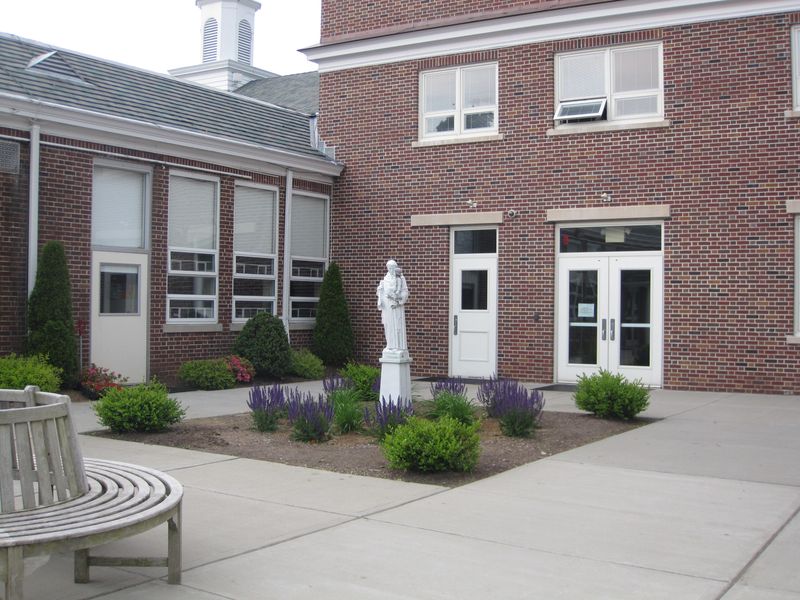 For quite some time now, Saint Anthony had been lodged on the top step into a no longer used doorway to the former nun's chapel, now a Pre-K. At the beginning of the school year, a suggestion was made to move him out of obscurity into a more important location on the campus. Since there was staining and damage to the infant Jesus from rain water run-off from the roof, the idea was that we would clean the statue and then move it. Homemade attempts at removing the stains were unsuccessful and the matter was forgotten.

A few weeks ago, we decided to move the statue and worry about cleaning it later and this was accomplished. Now St. Anthony graces the main event entry doors to the gymatorium. Here are some pictures of his new location. We'll surely add some additional plantings, especially some evergreens so that there is foliage year round. Perhaps we can decorate the statue to commemorate his feast day which is June 13th.

Thanks to Roger Trendowski, our business manager for organizing the project and to Jose, Eduardo and Francisco for their hard work digging the foundation and carefully moving the heavy marble statue and pedestal. 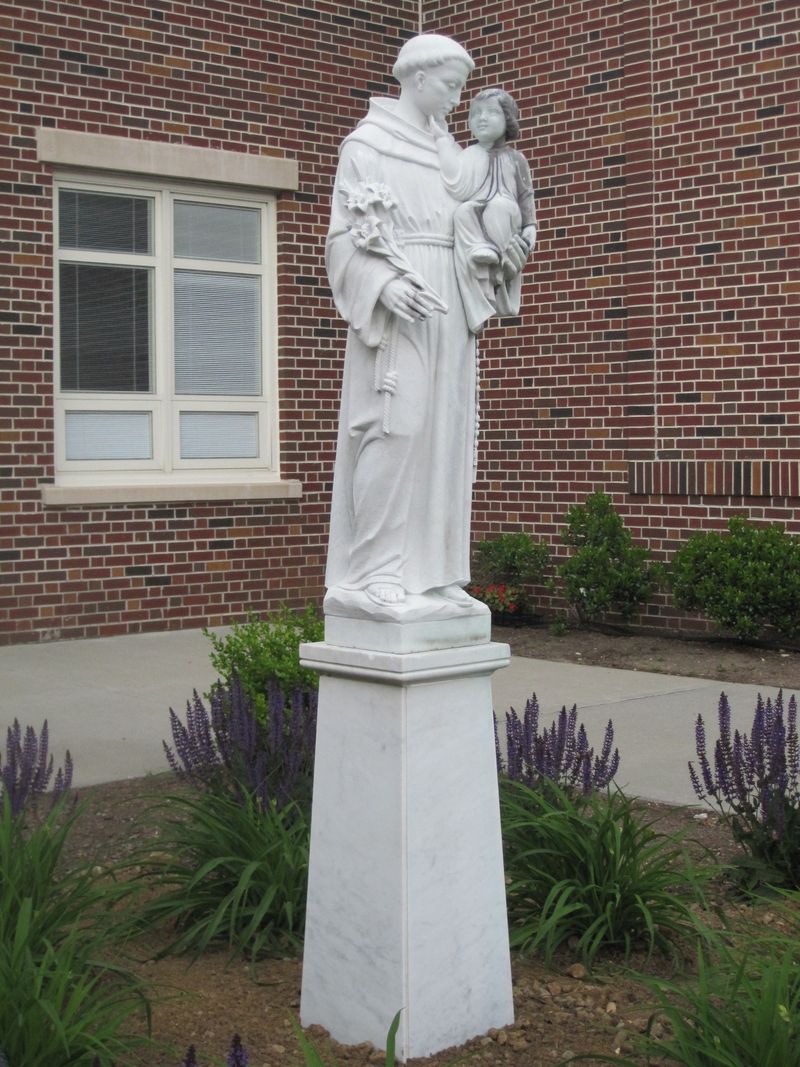 I hope you have been reading the pope's remarks he made on his trip to Portugal. Each speech, no matter to whom it is addressed, has wisdom for everyone and thoughts for prayer.

While addressing his entourage on the flight to Portugal, the pope welcomed dialogue with secular power and affirmed its necessity, but issued a clarion call to Christians: "Seek dialogue, but be ready for martyrdom." 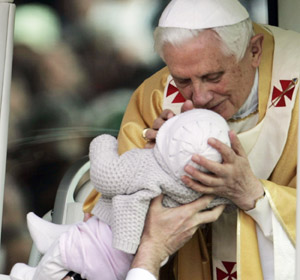 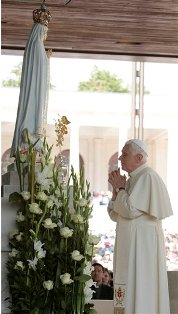 Photo courtesy of The Anchoress, a great blog to visit often.

A few years ago I discovered a Yahoo group for alumni of my parish Catholic grammar school. It was really fun to relive old memories and catch up on what has happened to former classmates since graduation (so long ago!). Two things began to make it not so much fun for me: 1) people began saying really vicious things about former teachers (lay and religious) and parish priests; 2) the whole group became involved in a controversy concerning placement and use of a flagpole on the school and church property. The controversy itself was benign enough – it was the rhetoric around the conversation that quickly became vitriolic. When name-calling and character assassination took control over substance, I knew it was time for me to stop checking the page and check out. I let the moderator of the group know how I felt and left.

Recently, you may know of two Facebook pages regarding teachers at Holy Cross that were taken down by their owners for violating Holy Cross’ school policy regarding use of the Internet. The pages contained derogatory remarks about the teachers and one included a photo of the teacher in the classroom taken clandestinely with school computer equipment.

Today, I was emailed a link to a Facebook page for Holy Cross alumni which looks like it would be fun if it were moderated. Once again, however, the derogatory language used by some about the school and certain teachers ruin the fun of reliving memories both good and bad. What is it about the Internet that makes people think they can publicly post whatever they want to say about someone?  And why do 158 members of the group say nothing when it happens? 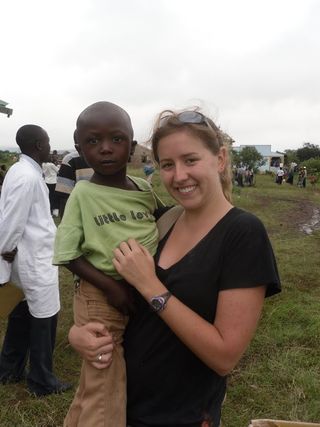 Holy Cross has been sponsoring a nurse in Kenya since the beginning of the year. One of the hopes we had when we began this support was that our children would come into contact with the zeal of those who bring physical and spiritual healing to those least able to afford it. Happily, this week through the efforts of CMMB, we were able to make a connection betweeen our seventh grade students and two nurses who work in the Kenya, one a medical volunteer, and the other our sponsored worker.

I hope we will have an article written by the children for our bulletin describing their experience. They pledged to keep in touch via e-mail.

Check out the Catholic Medical Mission Board Homepage 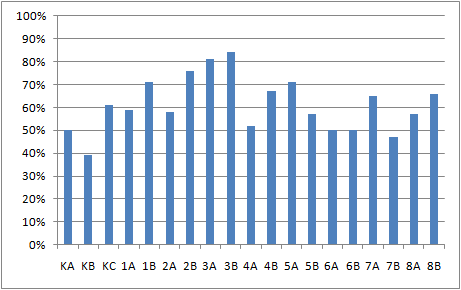 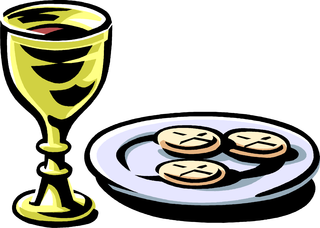 Always and everywhere we are thankful for Jesus' presence to us in the Eucharist and never more so when the parish celebrates First Communion.

The childrens' prayerful attentiveness and enthusiasm were inspiring and the pride and love of their parents was heartwarming. There is nothing so heavenly as the sound of childrens' voices singing praise to God!

First Communions To Be Celebrated Tomorrow At Holy Cross Church 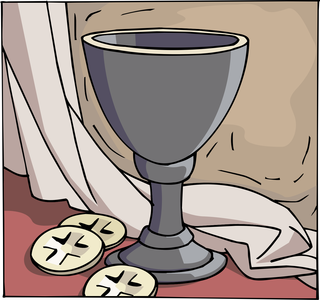 Four masses will be celebrated tomorrow during which children of Holy Cross parish will receive communion for the first time.

The children are well prepared and excited with full-out singing at the rehearsals.

First Communions are always a joy and blessing for our parish.

Magisterium in the Making

Today's first reading gives us an example of the working of the Church's teaching authority right from the beginning. Not sure whether Jewish dietary restrictions and circumcision ought to be required of new Christians, Peter and the apostles took counsel, prayed and issued a decision, sending it in writing to the Church at Antioch. The decision took into consideration the sensibilities of the people, but was guided ultimately by the Holy Spirit and not a plebiscite.

Let us pray for the Holy Spirit to continue guiding and inspiring the teaching office of the Church, so that the Church's teachings derive authentically from Christ himself.

We are happy to report that Brother James Butler, F.S.C. will address our graduates, parents and guests at Holy Cross School's Commencement Ceremony on June 11th. Brother James, as many of you know, is principal of Christian Brothers Academy in Lincroft. Many of our graduates attend CBA, so Brother James' words will be timely and personal.

There was insufficient interest in a May study group on Pope Benedict's "Jesus of Nazareth," so we will revisit the matter in the Fall.

Pope Benedict and the Shroud of Turin 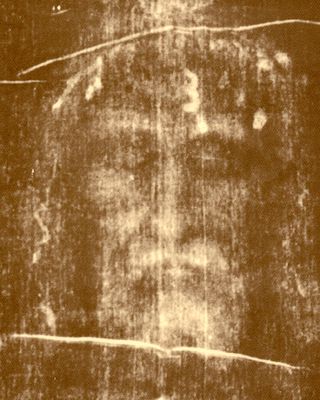 Pope Benedict is one of those rare individuals who although steeped in philosophy and theology can express these complex and profound truths in a spiritual and pastoral way.

His Holiness made a pilgrimage to see the Shroud of Turin and his words not only about the Shroud, but about the importance of Holy Saturday make for very prayerful reading. At Holy Cross, we have tried to give Holy Saturday its due importance in the Triduum - the time of soul searching and questioning the meaning of Jesus' life by disciples who hadn't understood anything about the resurrection. Even though we pray morning prayer on Saturday, the church is soon alive with the preparations for the Easter Vigil.

The pope begins his meditation by exclaiming that as he makes this pilgrimage, he carries the whole Church, indeed all of humanity in his heart.  Read his thoughts and save them for Holy Saturday, or any day that seems too dark.


Pope Benedict XVI's remarks after viewing the Shroud of Turin 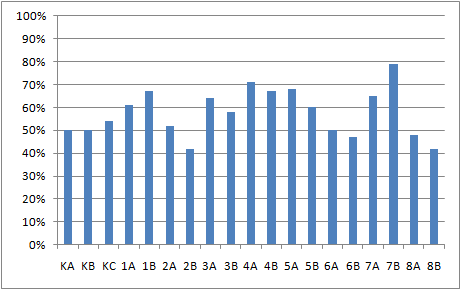 7A did pretty well.

Every year it seems the professionalism of the display and the marketing techniques of the CYO and Mr. Feerst gets better. This year in addition to portable tent shelters, they pressed an unused chair rack into service as a hanging planter display, had several CYO members on hand to help carry plants to cars, and had a display of empty pots and planters for sale. The main entrance to the gymatorium resembled a garden center.

The assortment of plants was varied and very healthy. One of the new varieties of petunias is on sale, but it's even interesting just to look at, "Pretty Much Picasso" Petunias 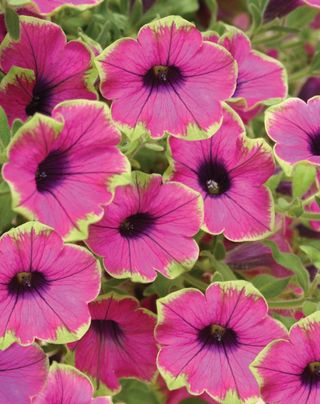 Seedlings and plants are sprouting all over the campus; after the coming storms, we'll try to post an update of photos.

Pope John Paul II announced a revised version of the Missale Romanum during the Jubilee Year 2000. Among other things, the revised edition of the Missale Romanum contains prayers for the observances of recently canonized saints, additional prefaces for the Eucharistic Prayers, additional Votive Masses and Masses and Prayers for Various Needs and Intentions, and some updated and revised rubrics (instructions) for the celebration of the Mass. The English translation of the Roman Missal will also include updated translations of existing prayers, including some of the well–known responses and acclamations of the people.

translation is edited and released.  Click on the logo below:

Come Holy Spirit Enkindle in Us the Fire of Your Love 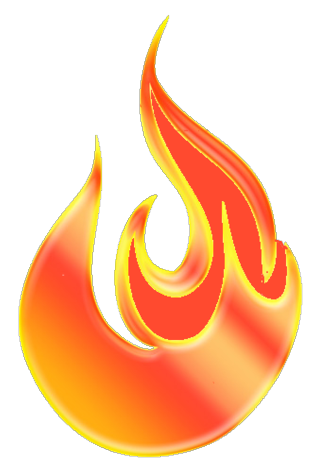 Congratulations to our newly confirmed young men and women, their sponsors, parents and families on their reception of the Sacrament of Confirmation on Friday evening.

Their attentive and prayerful attitude is a testimony to not only their own faith, but the diligent preparation that Mrs. Sallie Kabash and her catechists, their grammar school teachers, parish staff have encouraged them through.

Thank you to Msgr. Joseph Rosie for visiting our parish to confer the sacrament and for the warm wishes he extended to parishioners on behalf of Bishop Smith, who is on a pilgrimage to Lourdes.